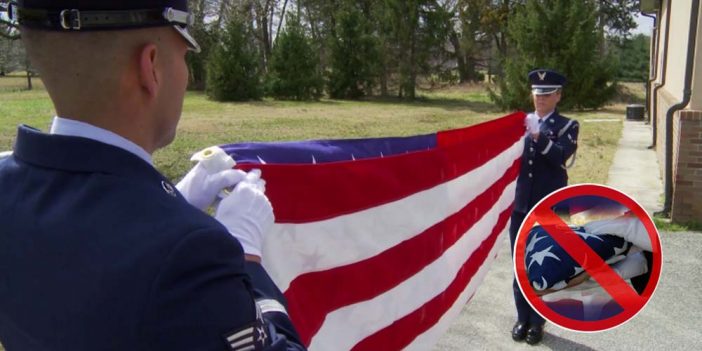 Proper American flag etiquette is extremely important, especially if you’re a citizen of the United States of America.

We proudly raise and salute our flag in remembrance those who fought and died for our freedoms. Sometimes, though, what comes up must come down, and when it comes to taking down the American flag for any reason, one must take necessary steps to show respect to the flag. The same rules apply to raising up the American flag for patriotic holidays or just because!

When displaying the American flag, let’s say, for The Fourth of July, always make sure that the American flag has dominance over any other flag in cross-staff. When displayed on an angled staff or on the front of a building, the flag must be at the peak of the staff. Finally, whether it’s hung vertically or horizontally, it must be hung flat and the union should be at the flag’s own right.

Some additional things to remember when raising up your American flag; on vehicles, the flag should be displayed to the front, right fender and if an American flag is displayed at nighttime, it must be lit.

Now, what are the “Don’ts” of American flag etiquette? You may be shocked to know that you’ve already done some of these ‘don’ts’ unknowingly.

The common “Dont’s” of American flag etiquette include, not using the flag as clothing or drapes, letting the flag touch the ground, or drawing on any part of the flag. Additionally, you should not display a battered or torn American flag and do not put your flag away unfolded.

What happens when you need to retire an old American flag? You throw a going-away ceremony!

Here are the steps to properly retiring an old American flag:

Make sure to SHARE this article with your friends who are celebrating patriotically this  Fourth of July. And remember, these flag etiquette tips are to be referred to year-round.

Be sure to fly your flag at half-staff on Memorial Day until noon!