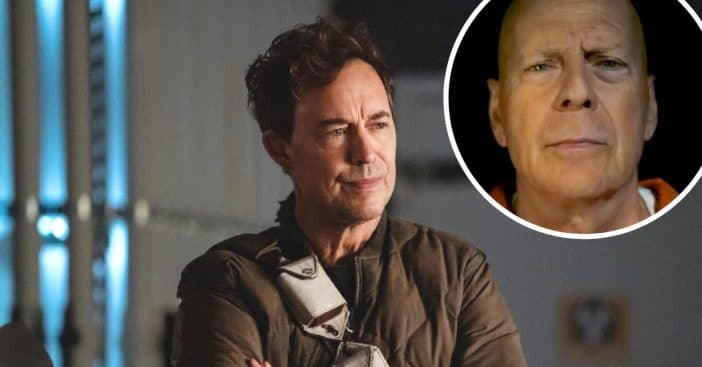 Bruce Willis recently revealed his aphasia diagnosis and announced his retirement from acting. Bruce has filmed several movies in the past few years, and his co-stars are speaking out about feeling immensely grateful that they got to work with Bruce on his final films. One of these stars is Tom Cavanagh, who appears in the film Corrective Measures with Bruce.

Tom shared, “This is a privilege. Growing up as a younger actor, I remember being hyperinfluenced by his command of the screen. It’s not as easy as people think to do small stuff and have that project large. Not every actor can do that. Not many actors do.”

He added, “Even when Bruce was doing ‘Moonlighting,’ he had the ability to say nothing and yet command the screen. And then, of course, he went on to huge movie franchises, like ‘Die Hard.’ But one of the things that Bruce would do that I was always impressed by was the way he played an ordinary person in extraordinary circumstances. While he was saving the day, he was afraid and vulnerable, which I think is part of the appeal.”

Tom explained that more people can relate to Bruce’s vulnerability rather than a superhero character. He shared that he doesn’t know if Bruce even knows how much influence he’s had in Hollywood over the years or how many actors look up to him, but he reiterated how privileged he was to work with him.

Bruce has about six more films coming out soon that he filmed before his retirement announcement. You can watch Corrective Measures on the streaming service Tubi for free. Watch the trailer below:

Click for next Article
Previous article: This Is The Song Ringo Starr Wants Played At His Funeral
Next Post: Why Singer Sheryl Crow Is Happy She Never Got Married