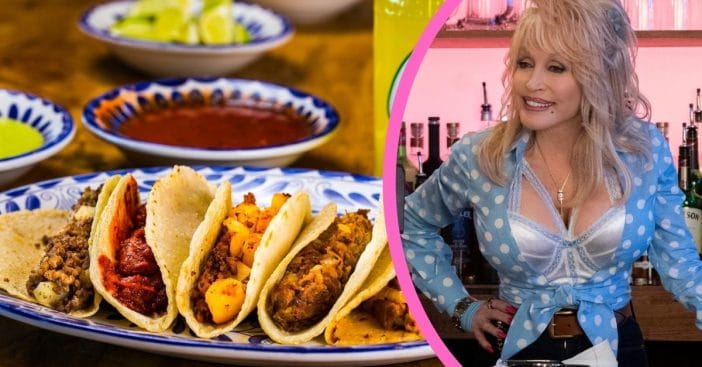 Food has always been very important to Dolly Parton after the country music icon grew up in a crowded household where desserts were limited. Today, she loves cooking meals for herself and husband Carl Dean, but that doesn’t mean Parton doesn’t enjoy some fast food takeout too.

But where does the queen of country go when she wants a quick, easy bite to eat? Parton recently spoke to Insider and admitted that Taco Bell has her enthusiastic patronage. And what does she get when she orders from there? She has a menu recommendation to answer that question too.

For the most part, Parton isn’t afraid to get her hands dirty acting as the personal cook for herself and Dean. But when she isn’t making the meals herself, Parton can rely on some fast food, especially from Taco Bell.

“I like soft-shell tacos,” she shared. “I like the others, but they fall apart so bad, especially if you’re riding around. So I always get a Taco Supreme, with the sour cream and all that, in the soft shell. I love that.” For side meals, she goes with rice and beans and adds, “I get mild sauce. I don’t like to get it too hot and ruin everything.” Insider further specified that she liked Taco Bell’s Mexican Pizza, a dish she hopes makes a long-term comeback to the menu.

Changes in and out of the kitchen

“They used to make a little … Mexican Pizza,” Parton mused, “which is also good. I love that.” But in November 2020, that menu item disappeared. Talk continues that maybe the fast food chain will bring the meal back, to which Parton feels, “I think they should!”

Change is the new normal for many fast food chains, from Taco Bell to McDonald’s, Burger King, and more; deals now provide consumers with less food in some cases, as a method of saving money and staying financially afloat against the competition. Though she’s missing the Mexican Pizza, Parton will still get to have a nice time eating, though she has admitted to being a messy cook. That’s where Dean comes in to save – and clean – the day.

Have you tried these meals Parton recommends?

Click for next Article
Previous article: Renee Zellweger Opens Up About ‘Jerry Maguire’ And Working With Tom Cruise
Next Post: Kathy Kinney From ‘The Drew Carey Show’ Is Now 67 And Reads Books To Kids As Mrs. P