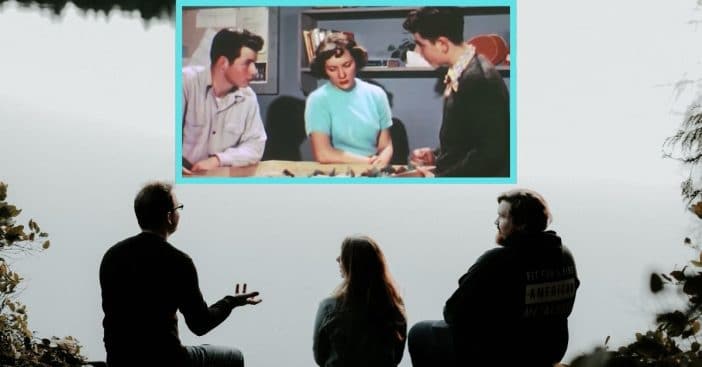 The past has a funny and unexpected way of appearing again. It is said that if history does not repeat itself, it rhymes. In decades past, Coronet Films produced a series of informative documentary short films for public schools. In 1950, it produced one on talking.

Specifically, it teaches “Ways to Better Conversation.” Not only is the nearly nine-minute-long video a lively visit back to classrooms of the ’50s, but it outlines conversational decorum that is as relevant now as it was then, in the same and new ways.

There is an art to proper conversation

There was a time of commonplace decorum, a time where certain practices felt relatively mainstream. Before the advent of cell phones – never mind social media – people expected they would be holding conversations with one-another face-to-face. And like the proper positions for silverware at a table, there was a form to conversations, rules for talking well to one another. All this has changed dramatically today with cellphones, but this propriety had a strong presence in years past.

The 1950 video explains this by likening talking to a game of volleyball. A good conversation is a good game where everyone can have a good time. it is further compared to a team sport where everyone has a part they can play and element they can contribute. The serving move is the initial idea that starts the conversation. Teammates agree. Opponents disagree. But it is all kept cordial, sportsman-like, the kind where rivals decide a match and can still shake hands at the end because everything before was honorably done. These guidelines do not mean a conversation can’t color outside of the lines; spontaneity and freedom are encouraged in the video, just as athletes can’t account for everything during a game. But everyone follows the rules of the game; volleyball players are not going to suddenly start hitting the ball with bats or each other with gloved fists.

The company behind this video, Coronet Films, was founded in 1934. Eight decades later, and their creations are still relevant – both in the same ways the filmmakers likely intended and in new ways with the advent of remote conversing.

Topics and audiences ranged greatly for Coronet. Its library includes instructional military videos and bird documentaries. Among companies creating videos for the classroom, it was one of the first to shoot in color Kodachrome, making it a standout among competitors. In addition to offering color and black-and-white options, Coronet also recruited popular stars of the time, including at one point Dick York of Bewitched fame. Over time, the company ended up largely distributing films produced by others, but the content of its original work remains relevant today. Not only does this fall within the realms of an important lesson that might come up in home-ec classes, but as digital communication becomes more mainstream, it’s important to remember the art of talking.

Did you watch any of their informative classroom videos when you went to school?

Click for next Article
Previous article: Melissa Rivers Opens Up About Her Journey With Grief After Her Mom, Joan Rivers Died
Next Post: At 76, Party Icon Bianca Jagger Is A Great-Grandmother Fighting For Girls Everywhere