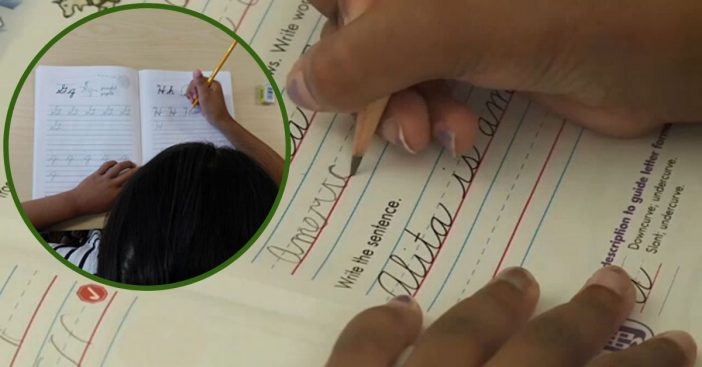 A new bill would require New Jersey schools to teach cursive writing/script to their elementary students. Democratic Assemblywoman Angela McKnight proposed a bill that would “require elementary school curriculum to include activities and instructional materials to help students become proficient in reading and writing cursive by the end of third grade.”

McKnight cites some important research that suggests learning how to read and write in script helps children develop cognitive, motor and reading skills. Furthermore, it may also greatly help those with learning disabilities.

A new bill to require script in elementary schools

“Our world has indeed become increasingly dependent on technology, but how will our students ever know how to read a scripted font on a word document, or even sign the back of a check, if they never learn to read and write in cursive?” McKnight says in a recent statement. New Jersey is one of the many states that have chosen not to include script in their teaching curriculum.

It was originally dropped as a Common Core requirement back in 2010, which explains why many schools don’t even teach it anymore. It seems to be making a comeback though, as a Texas school is already working to implement cursive once more as well. Actually, more than two dozen states are already in the process of trying to reinstate script.

There are a lot of opinions on this

If the bill passes, it would apply to the first full year of school. Many people have conflicting options about whether or not this bill should be passed. In response to McKnight’s tweet above, many people are expressing their thoughts about it. One person says, “I’m glad my wife and I chose not to have kids. This would be infuriating if we had them. What a complete waste; being taught an obsolete skill. What’s next, doing math with a slide rule?”

Another person responds, “It’s about time someone woke up and spoke up. Our kids need that skill! I back you all the way Assemblywoman McKnight!”

In conclusion, what do you think about this new bill? Should cursive writing be reinstated in our schools?

Click for next Article
Previous article: Starbucks Is Doing A BOGO Deal On Thursdays This Holiday Season
Next Post: Celebrating Forty Years Since John Denver And The Muppets Teamed Up For Christmas