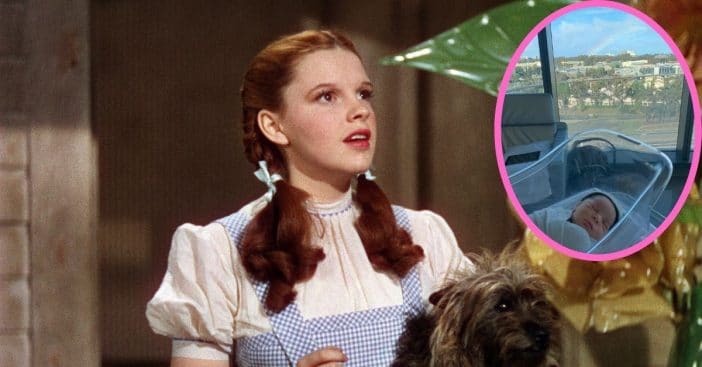 Vanessa O’Neil, the 31-year-old granddaughter of Judy Garland, recently gave birth to a son, Kieran. This occasion, already special, was made even more magical when, mere hours after Kieran’s birth, the family witnessed a sign surely sent by Garland from over the rainbow.

Vanessa’s mother, Lorna Luft, who is one of three children of Garland, shared a photo of newborn Kieran, cradled just beneath the arc of a rainbow. Vanessa herself also talked about the remarkable moment, which she considers to be a sign from her grandmother, who died in 1969.

“Mom, your mom is happy”

Earlier this month, Vanessa gave birth to Kieran, her son with husband Patrick O’Neil. Kieran is now the baby brother of the couple’s first child, 5-year-old Logan. Luft’s official Facebook account shared a photo “was taken a few hours after Little Kieran was born.” The caption continues, “I think you all will see the astounding rainbow that appeared in the sky. Vanessa said to me ‘mom your mom is happy.'”

Sure enough, the picture, shared on the evening of March 6, shows baby Kieran with his eyes closed, swaddled in front of a window with an unmistakable rainbow arcing across the sky. Kieran is the fourth of Garland’s great-grandchildren, though his mother, Vanessa, did not get the chance to meet the famous Wizard of Oz actress.

Judy Garland sends a sign from over the rainbow

Vanessa spoke with TODAY on Tuesday about Kieran’s magical first day in the world. “You could see behind the little bassinet that my son was in, sure enough, just a big rainbow right there,” she recalled. “It really makes you feel like, hey, like you are sending me a sign that you know. Thank you.” Garland famously sang “Over the Rainbow” for The Wizard of Oz, making her and the colorful display practically synonymous.

Lorna, in addition to Vanessa, also has a son, Jesse, who in turn has two children, completing the list of four great-grandchildren of Judy Garland.

Click for next Article
Previous article: Oscars Celebrates 50 Years Of The Godfather With Al Pacino, Ford Coppola, & Robert De Niro
Next Post: Walmart Will Stop Selling This Major Product In Select US States