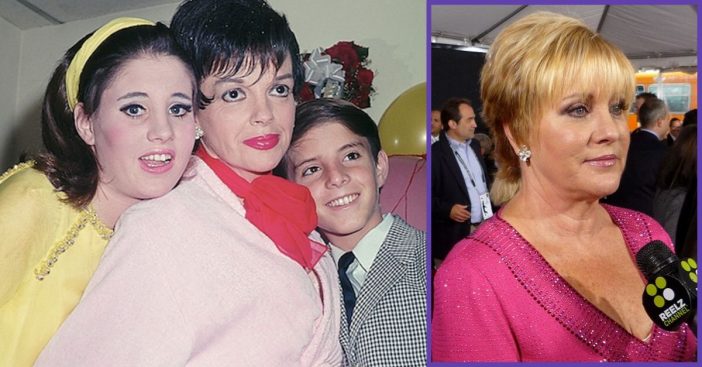 Judy Garland’s daughter, Lorna Luft, says that her late mom would have lived longer if she were born at a later time period. She says this is because there’s less “shame” around substance abuse/addiction and much less of a stigma surrounding it. Lorna, who is 66, appears on This Morning. She talks about how back in the ’60s, there was no eduction surrounding drug addiction.

The late Wizard of Oz star was sadly plagued with a life of alcohol and substance abuse later on in life. She would eventually die from a barbiturate overdose in 1969.

Lorna says, “We have so much education about the world of addiction and it’s so prevalent in everybody’s life right now – and the stigma has been taken off. It’s okay to say “I have a problem” and back then it wasn’t.”

She goes on to say that the easier access for prescription drugs back then means it was easier for addicts to “keep that part of their life going.” And this sort of thing plagued so many of Hollywood’s finest back in the day. They would ultimately end up dying a premature death. “It was shameful but it was different because it was doctors who were writing prescriptions,” she says. “So something made it sort of okay for that person to keep that part of their life going.”

What she has to say about the new ‘Judy’ biopic

Lorna continues, “We have a long way to go but we have the education, facilities, and knowledge – it’s not so much a shameful problem anymore, it’s okay to say “I need help.”” She’s so right about that, and we hope that in the future, more celebrities feel that it’s okay to recognize they have a problem and reach out for help.

Garland’s daughter also talks about the new biopic about her late mom. The biopic focuses on the star’s later years, including her declining health and substance abuse. She says watching one of her mother’s many films was preferable to seeing the biopic, for obvious reasons. “I always want people to look at my mother’s work,” she emphasizes. “I think that’s really important.”

Click for next Article
Previous article: ‘Brady Bunch’ Star Susan Olsen Says She Hated Being On The Show
Next Post: Marie Osmond’s Son Was ‘Bullied Very Heavily’ Before His Suicide