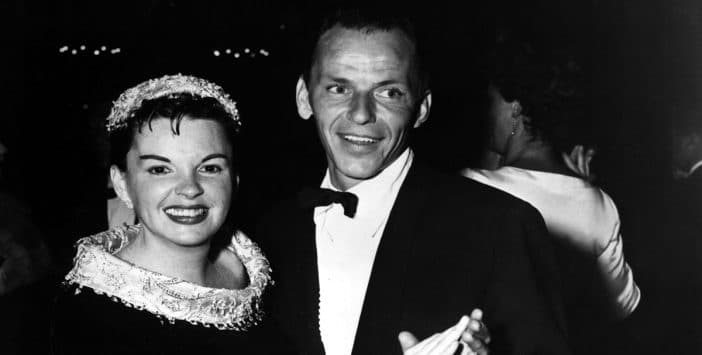 Romance came easily for Judy Garland, but holding on to it proved far more elusive. Yet when it came to her connection with Frank Sinatra — romantic or otherwise — they were kindred spirits, bonded together for much of their lives. “They were compassionate and passionate people,” renowned Judy historian John Fricke explains in an exclusive interview. “And they were arguably the two best singers out there, male and female, and just hit it off.”

They met in the early 1940s, in Hollywood, while performing on network and American Forces Network radio. At the time, Frank was married to Nancy Barbato (“But he was in his ‘enjoying stardom’ phase,” Fricke says) and Judy was between her marriages to David Rose and Vincent Minnelli.”

Always There For Each Other

He admits, “I don’t know when their physical relationship started. [iCollector.com auctioned] off a letter — a note from Judy to Frank — saying it’s this meaningful thing about their passionate love affair, but it really isn’t. If you read it, she’s thanking him for being a good friend to her, which he always was. They were very very supportive of each other … most of the time.”

“In the ‘50s,” Fricke adds, “there was a time when he was unhappy with her because she went to Vegas to sing, but she wouldn’t sing in the club that he sang at or that he was involved with. So there were these little fractious things, but they were very, very minor. Overall, I think they were friends with ‘benefits.’ That’s the best way to put it, because I don’t want to make them any more sleep-arounds than they were or weren’t. She looked to him in moments of distress, and I think vice versa. Not in a big dramatic way, but they realized they could always pick up the phone and call on each other.”

One of the loveliest stories Fricke has heard about the duo came from songwriter Sammy Cahn, who reflected on what Frank said about Judy after they sang together on the radio in the ‘40s. “When Frank came back over to him during a break,” he smiles warmly, “Sammy said, ‘Frank, what’s it like singing with her?’ And Frank, with his powers of perception, said of her commitment to a song, ‘Every time she sings, she dies a little.’ And when she did die, Frank was quoted as saying, ‘The rest of us will be forgotten. Never Judy.’”