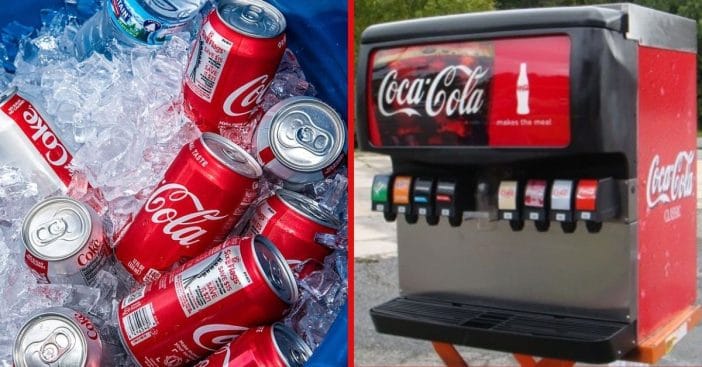 It’s no trick of the mind or the taste buds; soda from a fountain vs. can does taste different – and for many reasons. In fact, there are subtler differences in soda flavors between restaurant chains because of variable amounts of ingredients and storage protocols. But those distinctions are especially evident between fountain soda and a canned soft drink for equally distinct reasons and assumes the brand is the same, be it Coca-Cola, Pepsi, or something else.

A lot of factors are influencing a soda’s flavor, depending on where it’s coming from. Some of that starts right with the ingredients, especially the syrup-to-water ratio. But then there are also outside forces added into the mix – literally – like ice. That’s also before considering carbonation, metal used for storage, and more. So, why does soda from a fountain versus a can, and between different restaurants like McDonald’s taste better sometimes more than others?

Imagine the perfect day for a flavorful meal at a restaurant – be it a fast food joint or something more formal. Soda, no matter the brand, provides quite a refreshing burst. Something about it here, though, is different from what’s sitting in a can at home. Why? Because at the restaurant, the venue exercises some control over the drink. For example, TastingTable names McDonald’s as particularly celebrated for its fountain soda. That’s because it makes some particular choices when mixing, storing, and serving the drink.

For one thing, the restaurant carefully doles out the special water to flavored syrup ratio, generally agreed to be 5-to-1. But it also goes an extra step and adjusts the amounts to account for melting ice, which otherwise risks distilling the beverage and damaging the flavor. It even cools the syrup beforehand and runs water through a filter. All that work on the drink itself is important, but the container it sits in is actually just as important and influential too.

Both canned and fountain soda contain pros and cons

Canned soda comes with some benefits as well. For example, those drinking from a can don’t contend with ice anyway, so dilution won’t ever be an issue from water. However, the aluminum of the can is porous; this leads to more carbonation and a flatter sip.

Meanwhile, reportedly, McDonald’s is also the only fast-food chain that has its sodas transported in stainless steel vessels. Other chains apparently have them delivered in plastic bags. But going the stainless steel route allows for protection against air, light, and different temperatures, which MyRecipes writes can all damage a soda’s flavor.

Which do you prefer, fountain or canned soda? Which brand? Who else is really thirsty now?

Click for next Article
Previous article: At 67, John Pankow From ‘Mad About You’ Enjoys Cooking For His Family
Next Post: ‘Seinfeld’ Actress Estelle Harris Dies At Age 93