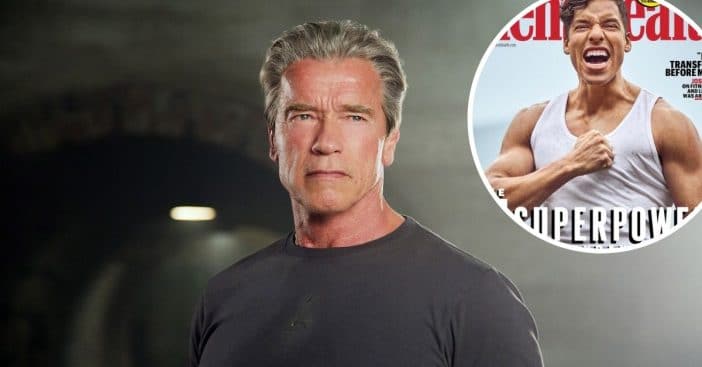 Arnold Schwarzenegger is recovering after being involved in a car accident in Los Angeles. Reportedly, his Yukon SUV rolled over a Prius after hitting a Porsche Cayenne last month. Arnold’s youngest son, Joseph Baena, recently shared an update on how his father is doing.

He said, “My dad is always great. He’s doing fantastic, always training, always staying healthy. As far as I know, he’s doing really well.” While the 74-year-old and 24-year-old get along great these days and share their love of fitness, it wasn’t always easy.

Joseph is Arnold’s son with Mildred Patricia Baena, the former housekeeper of the Schwarzenegger family. Arnold had an affair with her while he was married to Maria Shriver. He shares four children with Maria, so of course, Joseph wasn’t always welcomed with open arms by the rest of the family.

It seems things are different now as Joseph is following in his father’s footsteps with acting and fitness. However, he doesn’t want to find success based on his father. Joseph said that he will keep the last name Baena so that he won’t have to live up to the Schwarzenegger name.

He added, “Well, the thing is that I have my own goals, and I’m staying my own course with my own goals, and I know exactly where I want to go and where I want to be, so I don’t really feel pressure to follow in his footsteps, per see. But, you know, I do want to make my family proud – my mom, my dad, my family and my brothers and sisters. So that means a lot to me, and family’s everything to me.” Recently, Joseph was the youngest person to be on the cover of Men’s Health so it sounds like he is on his way to success!

Click for next Article
Previous article: At 93, Marion Ross From ‘Happy Days’ Is Enjoying Retirement While Cherishing The Past
Next Post: Kelly Ripa And Mark Consuelos On Why They Don’t Celebrate Valentine’s Day