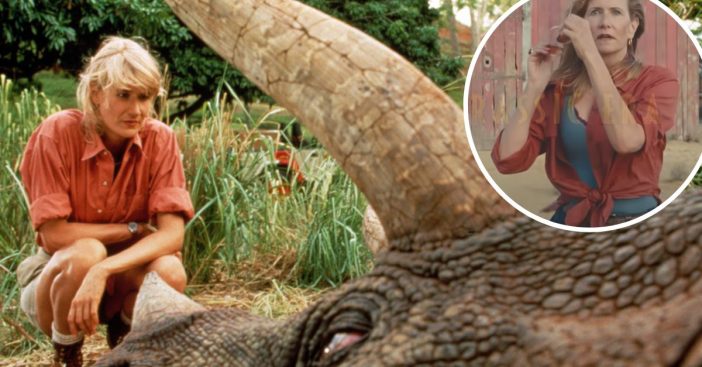 The trailer for Jurassic Park Dominion is finally here! The new film pays homage to the first Jurassic Park film in many ways. It will bring back several of the actors from the original film including Laura Dern, Jeff Goldblum, and Sam Neill. In the trailer, you can see a glimpse of Laura’s character Dr. Ellie Sattler. Her outfit definitely brings back memories of the first movie!

In the 1993 film, Laura wore a shirt tied in a knot over a tank top and khaki shorts. While you may not think much of their outfits in the movie, it was reportedly meant to be slightly feminine but also show authority and be realistic. It wouldn’t be right if she were running from dinosaurs wearing heels.

Her salmon-colored shirt from the original film was once in an auction and said that it was just a shirt from Gap. In the trailer, she wears a very similar outfit but with navy shorts instead of khaki. It is likely a tribute to the original film and shows that she hasn’t changed much in 30 years.

Laura did return for the third Jurassic Park film but she hasn’t been seen in one of the movies for over twenty years. It is great to see some of the original cast together in the new movie. Are you going to watch it?

Check out the trailer below to see a glimpse at her outfit as well as the premise for the film:

Click for next Article
Previous article: Kelly Ripa Shares Intimate Bedroom Photo With Husband Mark Consuelos
Next Post: ‘Jeopardy!’ Fans Angry About This Change Mayim Bialik Made To The Show