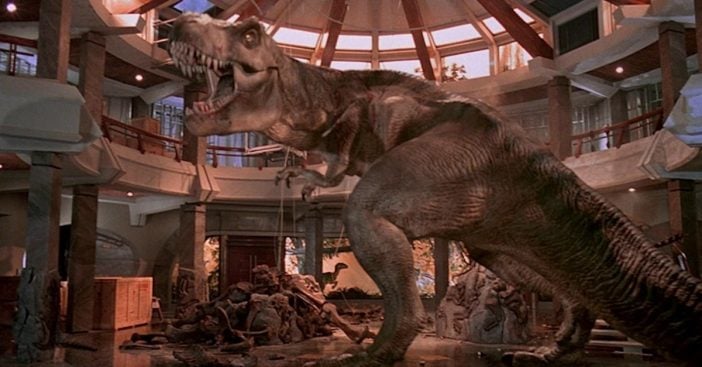 Hold on to your butts! On June 11, 1993, Jurassic Park debuted in theaters across the country. At the time, it looked like it was just going to be a single film, based on the book of the same name. Since then, there have been three sequels, with a fourth one set to release in June 2018.

Jurassic Park was a box office smash hit in 1993 and went on to win many awards, including three Academy Awards for the achievements in sound design and visual effects. The movie has since been considered the landmark for animatronic visual effects in film. The groundbreaking computer-generated imagery by Industrial Light & Magic were paired with life-size animatronic dinosaurs. Can you believe this movie turns 25 this year?

1. The dinosaur sounds were made using penguins and tortoises

The sounds of the dinosaurs in Jurassic Park came from multiple animals, some of which might have never seemed realistic. The sounds of the raptors barking are actually the sound that tortoises make when they are mating. The T. rex’s roars were a combination of dog, penguin, tiger, alligator, and elephant sounds.

2. The climax of the movie was changed just weeks before filming ended

If you’ve read Jurassic Park, then you know at the end of the book, the T. rex dies. Steven Spielberg felt that audiences would have hated him if he kept this. He felt that the T. rex was the star of the film, so he gave her one final heroic moment to end the film. Originally, the raptors died by the hands of the T. rex model, but in the film, the T. rex actually killed the raptors. She’s still going strong several decades later!

It was very cinematically important for the film, but Dilophosaurs don’t actually spit venom and have frills around their face. There is no conclusive evidence that any dinosaur possessed poisonous venom. The idea to have them do this came up from the novel’s writer Michael Crichton and was further embellished by the film’s director.

4. The T. rex breaking the Ford Explorer glass was not planned

This was actually an accident that happened during filming! The T. rex was supposed to get close to the plexiglass of the car’s sunroof, but not actually go through it. When the dino broke through the top, the screams from the actors were all too real.

5. There’s only a little over 14 minutes of dinosaur footage in the film

Jurassic Park is 127 minutes long, but the dinosaur footage only clocks in around 14 minutes and some change. That seems pretty little since it took 1 year just to make 4 minutes of footage. The filming of the scenes using animatronics and CGI was so extensive when Jurassic Park was being created in the early ‘90s.

6. Harrison Ford was almost in the film

Harrison Ford was up for the part of Dr. Alan Grant, after previously working with the director. However, he turned the role down, as he felt it wasn’t the right part for him. He still stands by his choice to pass up the opportunity!

7. You can spot Jaws playing during Jurassic Park

Long before Jurassic Park became Steven Spielberg’s most financially successful film, he was famous for his work on Jaws. During the scene where Nerdy is arguing with John Hammond, in the background, you can see Jaws playing on his computer.

8. They use drawings on a stick for dinosaur some stand-ins

During the scene where the T. rex eats a Gallimimus, a man was on screen, holding a stick with a drawing of a T. rex taped to it. Apparently, the little boy who played Tim (Joseph Mazzello) thought it looked childish!

Director Steven Spielberg wanted the velociraptors to be 10 feet tall, even though this wasn’t accurate to the previously discovered raptor remains. This was taller than raptors had been known to be, but while filming of Jurassic Park took place, remains were found that corresponded to this size. Paleontologists uncovered ten-foot-tall specimens of raptors called Utahraptors.

10. Steven Spielberg roared at the actors during filming

Since they didn’t have actual dinosaurs on set to roar, the director had to improvise. Whenever a dinosaur was supposed to roar in a scene, Steven would do his own version of a roar. Apparently, every time he did it, the entire cast and crew would crack up laughing. Can you blame them?

Previous article: Susan Lucci Says ’70 Is The New 40′ And Reveals How She Stays So Fit At 71
Next Post: Denise Richards Opens Up About Adopting Her Daughter And Raising Kids On Her Own