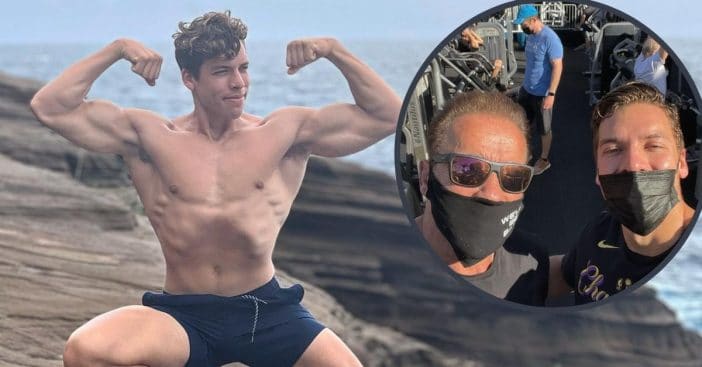 Now, Joseph is 24, and says he’s generally happy with his relationship with his dad.

Joseph Baena on his relationship with his dad

“I [was] 13,” he tells Men’s Health Magazine of the day he found out Schwarzenegger was his dad. It was a huge revelation for both parties involved. “Your body’s transforming; your mind is transforming. And now my life transformed before my eyes.”

Joseph had only ever known his Guatemalan roots, growing up with his mother and four half-siblings, celebrating Latin culture, food, and music. But he would soon realize he also shared a very common interest with his biological father—bodybuilding.

Following in his dad’s footsteps

Joseph realized he had a passion for athletics after a lot of trial and error with athletics in high school. He really first built up his confidence in the swimming pool before taking the lead on bodybuilding when he was given a copy of his dad’s book The Encyclopedia of Modern Bodybuilding.

“Even though I could call him anytime, I was too proud,” Joseph says of his early days in training. “I went straight to the book. I wanted to figure it out myself.”

Forging his own path

However, once Joseph turned 18, he reached out to his father and they began training together. One lesson that Schwarzenegger has applied for his son is a good work ethic. “My dad is old-school; he doesn’t believe in handouts. He believes hard work pays off, and so do I,” Joseph explains. “I love the word honor, and I’m very prideful in the sense that if I use my dad’s contacts or ask him for favors, I wonder what honor is that gonna bring me?”

And despite having a famous father, he wants his own identity and to forge his own path in life. “It took a little bit for me to realize that I don’t have to do what my dad did,” he said. “I don’t have to get into acting or bodybuilding. I’m very motivated and driven. I’m happy about my relationship with my dad. But I’m more happy that I am finding joy in what I’m doing and that I’m doing exactly what I’ve always dreamed about.”

Click for next Article
Previous article: ‘Butch Cassidy And The Sundance Kid’ Almost Had A Much Darker Ending
Next Post: After So Many Southern Breakfasts, Dolly Parton Shares Secret For Fluffy Scrambled Eggs