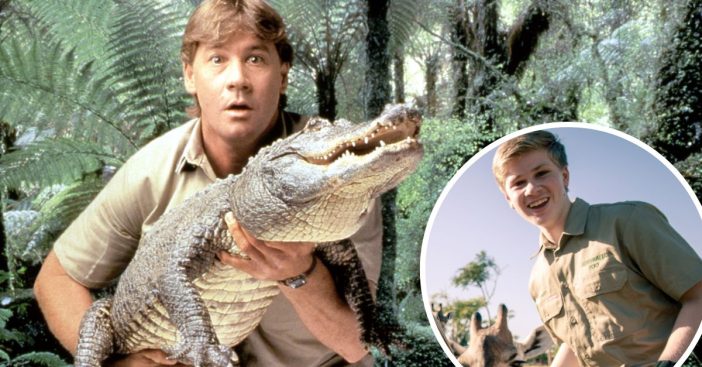 Robert Irwin, the son of the late Steve Irwin (The Crocodile Hunter) was recently chased by a crocodile while working at the Australia Zoo! The whole thing was filmed during the season finale of the series Crikey! It’s the Irwins which follows Robert, his sister Bindi, and their mother Terri.

Robert shared a three-minute video to Instagram and opened up about the frightening experience. He was feeding Casper the crocodile in his new habitat for the very first time. Casper decided to try to go after Robert instead of eating the meat that was given him, which led Robert to yell “bail, bail, bail” to the cast and crew of the show.

Robert Irwin gets chased by a huge crocodile

Casper weighs about 772 pounds and is over 12 feet in length! Can you imagine an animal that size heading right towards you? Even though Robert and the other zoo workers are trained, things can always go wrong.

Robert’s dad, Steve, actually rescued Casper in 2002 and Robert admitted that he has always had “wild behavior.” He added in the clip, “… and since Dad first got Casper, he’s had that instinct. I’ve got no idea how he’s going to react, and, honestly, that’s quite terrifying.”

He also shared, “We’ve definitely saved the best for last, including one of the most intense croc feeds I’ve done! We prioritize natural behavior with our crocs. By getting in their enclosures with them, and letting them put on those huge strikes from the water’s edge, they get to use all of their predatory instincts and they just love it! Plus we can educate everyone about their conservation. But safety for us is also crucial and you definitely have to know when to call it. And with such a powerful and quick croc like Casper we had no choice but to bail.”

Click for next Article
Previous article: An Inside Look At Barbra Streisand’s 23-Year-Long Marriage To James Brolin
Next Post: On 60th Birthday, Garth Brooks Gets Surprise Call From Hoda Kotb And Jenna Bush Hager