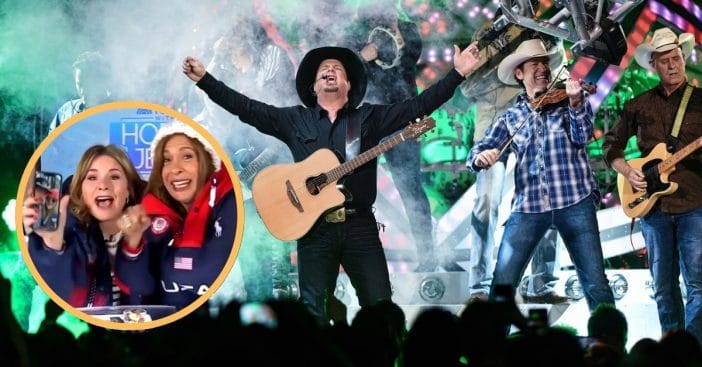 Garth Brooks celebrated his 60th birthday on February 7, and he ended up receiving some surprise birthday wishes from Hoda Kotb and Jenna Bush Hager of TODAY. The two launched a FaceTime call and recruited Trisha Yearwood to celebrate the country icon’s special day.

Born in ’62, Brooks achieved legendary status when his ninth album reached diamond status in the United States, breaking a record of six albums set by the Beatles, and one not matched by any artist since. Brooks has major support from Hager and Kotb, two very vocal fans who could barely contain their excitement on Monday.

On Monday’s episode of TODAY, Hager and Kotb launched a video call to Trisha Yearwood, the first step of their birthday surprise plan. When Yearwood picked up, Hager told her, “We have to say a little something to you.” They turned the phone so the audience could see the screen and the two hosts yelled together, “Happy birthday, Garth!”

Garth appeared then and Jenna reiterated, “Garth, happy birthday!”  The country singer shared a reply to their congratulatory call, though the audio on his end is hard to decipher. The two alternated between statements like this and Kotb’s “We were going to sing to you. We were going to sing to you and wish you a happy birthday. Is it OK if we showed you?” followed by Hager’s “Do we have permission to record you for the show?”

Cheerful wishes all around

In addition to Kotb and Hager, other fans of Brooks have wished him a happy 60th birthday. “Inside Studio G,” which airs on the singer’s Facebook page each Monday, wished Brooks a happy birthday and an accompanying video shows all the balloons, desserts, and gifts Brooks received.

As for Brooks himself, he took to Twitter to write, “The BEST way to spend my Birthday weekend… with YOU!!! Thank YOU!!!! love, g.” He also shared a photo of himself during a concert. Face masks on some audience members confirm this is very recent and an audience member confirmed by writing, “Such a great weekend. Thanks for the memories. I love celebrating our birthdays at your shows every year.”