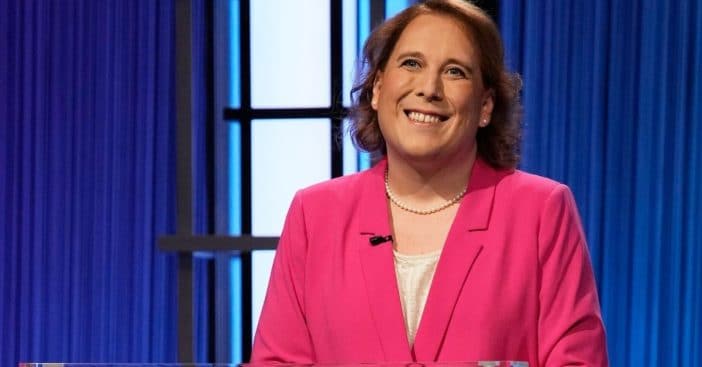 Amy Schneider continues her winning streak on Jeopardy! She just surpassed James Holzhauer for the third-longest streak on the show and is still going strong. Amy was asked if she would consider hosting the show once her time as a contestant has come to an end. Of course, former champion Ken Jennings is currently a host, so it is possible!

Amy said she would definitely consider it but she doesn’t know if she would be a good fit or not. She explained, “It would certainly be a cool experience. It’s a lot harder than it looks. Whether I’d actually even be good at it, I don’t know … But yeah, I’d certainly consider it if somebody asked.”

Amy Schneider would consider becoming the host of ‘Jeopardy!’

The long-running game show has had a very difficult time replacing longtime host Alex Trebek after he passed away in 2020. After a series of guest hosts, executive producer Mike Richards was chosen as the new host. However, offensive comments and actions from his past resurfaced and he promptly quit as both the host and producer on the show.

Right now, Ken Jennings and actress Mayim Bialik are switching off on hosting duties until a new permanent host is chosen. Perhaps Amy will get her chance someday! After all, she made history by becoming the most successful transgender contestant on Jeopardy!

She added, “Hopefully I can send a positive message to the nerdy trans girl who wants to be on the show too. I am from Ohio where the only trans people I thought of were drag queens or prostitutes. Seeing other trans women in a good spotlight inspired me to not be afraid of trying to compete in the thing I have always loved.”

Would you like to see Amy try her hand at becoming the host of the show?

Click for next Article
Previous article: ‘How I Met Your Father’ Premiere Pays Tribute To The Late Bob Saget
Next Post: Dolly Parton Celebrates Turning 76 ‘Just Hangin’ Out’ In ‘Birthday Suit’ With Throwback Photo