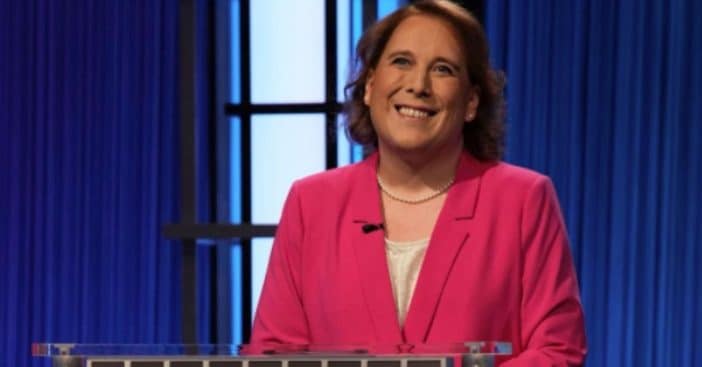 Following her success on the game show Jeopardy!, Amy Schneider took to Twitter recently to admit her life has been “tough” lately. Fans were a bit surprised to hear that all is not well with Schneider, as after her big wins on the show, she quit her job and signed with CAA to start writing a book. On top of that, she’s also been traveling, gotten engaged, and even had the opportunity to tour the White House.

“My life’s been tough lately. It’s been *good,* to be clear, about the best it’s ever been, just tough,” she writes in a tweet. “So I’m going to take it easy for a bit, and focus on low stakes tweets like “À la recherche du cell phones perdu” or “Every generation needs to discover Cutco for themselves.””

Amy Schneider gets candid about life being “tough” lately

My life’s been tough lately. It’s been *good,* to be clear, about the best it’s ever been, just tough. So I’m going to take it easy for a bit, and focus on low stakes tweets like “À la recherche du cell phones perdu” or “Every generation needs to discover Cutco for themselves”

As such, any fans took to the comments to lend their support and positivity to Schneider as she navigates through tough times. “Pace yourself – it’s a marathon, not a sprint. Stop and smell the roses,” one fan wrote. Another said, “I have 20-year-old Cutco scissors that are only for sewing – no paper!! Still very sharp.” A last fan chimes in, “You deserve a good long rest! Please take care of yourself! My 14yo trans daughter Alexandra needs wonderful role models like you to feel pride and assuredness,” another shared. “Thank you so much for all you’ve done for her future with your honesty and bravery! Mama Bear hugs!!”

Schneider has also opened up about her being transgender and how she presents herself, especially now as a public figure after being on Jeopardy!. She said, “I think the main thing that I got out of this was being OK with myself, how I look, how I present to the world. I’ve been openly trans for a little under five years now, and there’s still definitely lingering worry and dysphoria and things like that.”

She continues, “Just to get so much positive feedback, so much support and so much acceptance, it enabled me—by the end of it—to look at myself on TV and be like, “Oh, you know, she’s pretty, she’s fun, what a likable person.” And I’ve never been able to see myself that way before.”

Click for next Article
Previous article: ‘The Facts Of Life’ Cast Then and Now 2022
Next Post: Why ‘Moonlighting,’ Bruce Willis’ Breakout Gig, Isn’t Streaming Anywhere