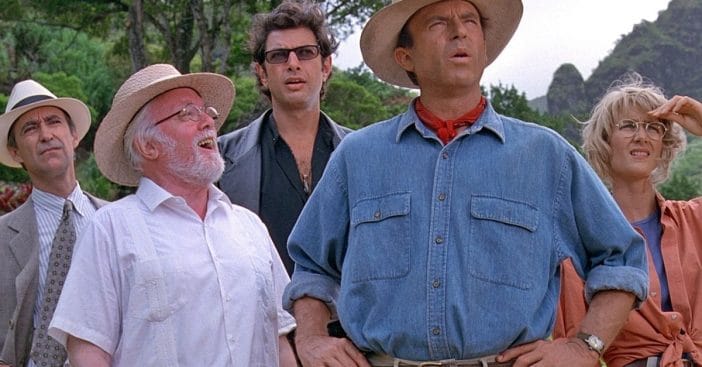 Three of the original Jurassic Park stars are back for a new film! The director Colin Trevorrow said he sent a photo of the original cast in the new movie to former director Steven Spielberg. Colin shared that Steven got really emotional upon seeing the photos.

He said, “The moment everybody shows up for the first time together, they’re all packed into a Jeep. And I took a picture of it and I sent it to Steven. He got very emotional. I don’t think even he was prepared for how moving it would be to see all of those characters that he loves, and people that he loves, looking incredible and on an adventure together.”

After fans saw Jeff Goldblum’s cameo in Jurassic World: Fallen Kingdom, they wanted the original stars back in another film. Colin listen and delivered. He added, “A movie like this, with our legacy characters playing as large a role as our modern characters… it’s challenging to bring it all together in a way that has momentum, and also isn’t a five-hour-long movie. It was nice to have the time to make sure that every character is honored in the way that they need to be.”

RELATED: The Little Boy From ‘Jurassic Park’ Is All Grown Up And He Starred In Queen’s Movie ‘Bohemian Rhapsody’

Jurassic World: Dominion brings back Laura Dern, Sam Neill, Jeff Goldblum, as well as Chris Pratt, and Bryce Dallas Howard. Laura also spoke about coming back for another Jurassic Park film. She shared, “Well, I’m so excited. We had an extraordinary time all being together and back together. I feel really excited and privileged to be part of something that in its core, you know, was environmental messaging thanks to [book author] Michael Crichton long ago.”

The film comes out in June 2022. Watch the trailer below: