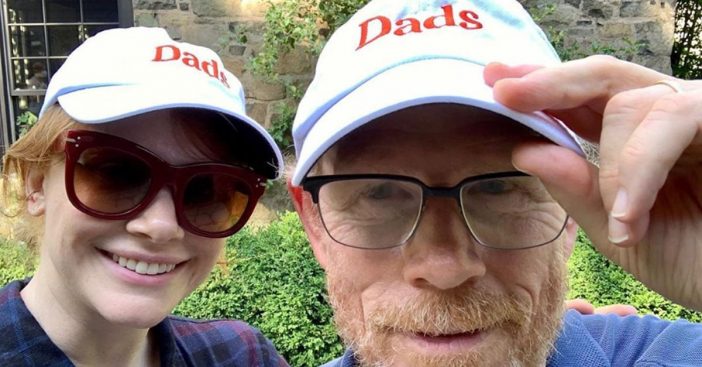 39-year-old actress Bryce Dallas Howard has shared the advice that her father, Ron Howard, gave her while filming the Dads documentary. The documentary itself focuses on modern fatherhood, and Howard is one of the people the documentary focuses on.

“My dad was like, ‘No. No, no, no, no, no, no, no. Nobody wants to see the movie that is Bryce saying ‘I love my dad,”” Bryce remembers. “I heard him, but while I was filming, I kept saying we need an expecting father. We need to see a father go through that transformation, going from not having a kid to having a kid.”

Thankfully, Bryce was able to turn to her brother, a father to be. “When I found out that my brother was gonna have a baby with his wife, I was like, ‘Would you be in my documentary?’ And they graciously said yes,” she says. “It just made sense at that point [to include Ron], just if nothing else, to contextualize my brother’s story to include my grandfather and ultimately my dad.”

Bryce says she intended for the documentary to be a  “product of generations of super devoted, committed, present fathers.” The doc is now available to stream on Apple TV+.

Click for next Article
Previous article: Bruce Willis’ Wife Celebrated Her Birthday With His Ex-Wife Demi Moore
Next Post: Five Nostalgic Businesses That Are Making A Comeback During The Pandemic