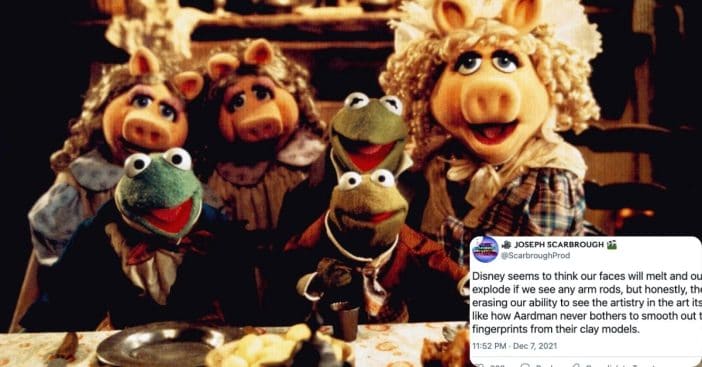 Disney+ is receiving backlash after it erased part of a classic Christmas movie, The Muppet Christmas Carol. An adaptation of Charles Dickens’ classic novel, it stays true to the original storyline while also managing to incorporate some Muppets madness and hilarity into it.

However, as fans of the movie went to sit down and enjoy the film, they noticed Disney+ made some subtle changes to the film…

Twitter user Shane O. Keating couldn’t help but notice that the streaming service likely removed the arm rods of some of the characters in a few scenes, perhaps to cause people to forget that they’re watching a movie about puppets that need to be manually moved around via arm rods.

RELATED: Disney Is Officially Working On A Biopic About ‘Muppets’ Creator Jim Henson

This isn’t the first time Disney+ has made “subtle changes” like this, only to enhance the viewer’s experience, but the reactions have been mixed so far. However, in this case, a lot of people feel like this was totally unnecessary as it is part of the Muppet’s charm and all part of the experience.

Others seem to think Disney+ is in the right

Disney seems to think our faces will melt and our heads will explode if we see any arm rods, but honestly, they’re erasing our ability to see the artistry in the art itself . . . it’s like how Aardman never bothers to smooth out the fingerprints from their clay models.

“Disney seems to think our faces will melt and our heads will explode if we see any arm rods, but honestly, they’re erasing our ability to see the artistry in the art itself . . .” says Twitter user Joseph Scarbrough in response to Keating’s tweet. However, some people did challenge that notion, with one person saying it’s a “needless waste of money” that could’ve gone toward the actors instead.

Someone met that response with, “No it couldn’t have. That’s not how payments in films are structured. Actors get paid residuals via their union/guild (SAG), based on the number of replays/reruns, on a sliding scale. Any additional payouts would have had to have been negotiated and put into their contracts.”

Ultimately, it’s a truly minor change that really doesn’t take away too much of the movie’s quality. What do you think about this subtle change from Disney+?