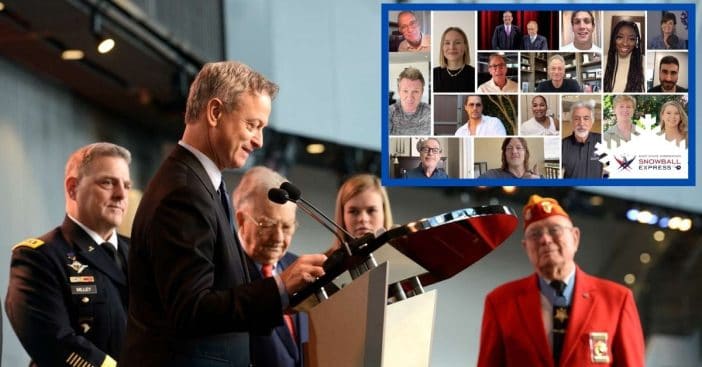 Since 2011, the Gary Sinise Foundation has provided a medley of programs and services to military veterans and their families. Millions of dollars and several custom homes later, the nonprofit continues to offer ways to address the needs of veterans, even those not physically visible. But the organization also looks after the families mourning a fallen soldier. Spouses lose a partner and children lose a parent. During the holidays, emotions of every type can be raw and bitter. To address these emotional needs, the organization runs its Snowball Express, which kicked off this week.

The Snowball Express would usually fly military families to Disney, to provide some pure, uninterrupted fun, along with special shoutouts. When the pandemic hit and with precautions still at play, it changed its routine; now, it virtually connects families with celebrities sharing special notes to them – and that’s only part of what’s promised.

All aboard the Snowball Express!

Gary Sinise grew up in a family of military veterans and his efforts to give to others started back in 1970, decades before his foundation. Even beyond its formation, Sinise has personally traveled around the world to support active military members. The Snowball Express actually predates the Gary Sinise Foundation, beginning in 2006 and partnering with the nonprofit in 2017.

Usually, it brought military families to Disney and featured special tribute videos, even with characters from big Disney titles directly addressing the participants. They could also participate in a Remembrance Garden honoring the fallen soldier of the family, a Walk of Gratitude, and a performance by the Gary Sinise & The Lt. Dan Band, which boasts 500 concerts and counting, all at military bases around the globe. This year, as with last, looked a bit different but with no less love put into it for the families of veterans, specifically fallen soldiers.

Recruiting others to spread the gratitude

There was again heavy emphasis on virtual activities, similar to last year, but the foundation assured in 2020 for its online Remembrance Garden, “was built out of a labor of love of hundreds of volunteers, over several days to ensure we were able to pay tribute and honor your hero this holiday season.” Similarly, 2021’s pulled no punches. Bindi and Robert Irwin gave young and mature viewers alike a look at an animal sanctuary; participants could chat with U.S. Space Force major Travis Tubbs or attend a slime class. Youngsters could learn cooking courtesy of Disney animations. Sinise also participated in a Q&A segment. According to the actor and philanthropist, the Snowball Express reached 1,800 children of fallen soldiers on its December 11 journey.

A video chronicling some of the goodness is already up. Check it out below!