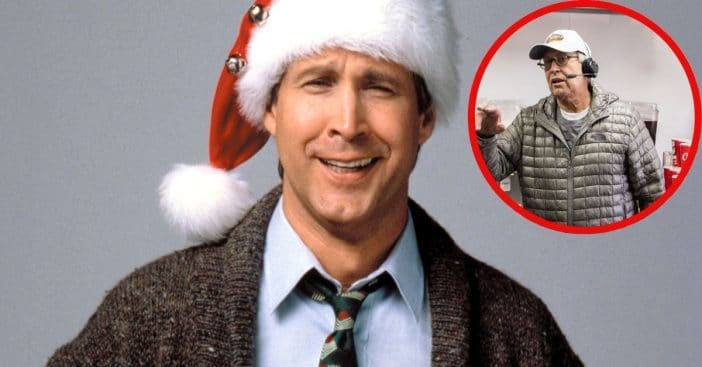 It wouldn’t be a Griswold Christmas without some good eats, and who better to prepare the meal than Chevy Chase himself? Diners at Raising Cane’s restaurant in Charleston had no way of knowing they would be served by the SNL veteran because this stunt was a total surprise.

While Chase was in the area, he asked the Raising Cane’s staff if he could join them. He was allowed back where all the culinary magic happens – or at least where it is dispensed to a hungry public, behind the counter and at the drive-thru window.

Chevy Chase serves up surprises at a local restaurant

Chase had been in the Charleston area after he attended a Q&A session after a screening of National Lampoon’s Christmas Family Vacation. The original event, hosted at the North Charleston Performing Arts Center, was called An Evening With Chevy Chase.

The following day, December 2, found Chase in Charleston, joining the staff at the local fast-food restaurant. Chase took orders at the cash register up front and manned the drive-thru line, serving chicken tenders and soft drinks to patrons, all while donning first an employee hat and then a Santa hat, not unlike the one from his time as Clark Griswold in 1989 and many years since.

Clark "Sparky" Griswold, aka Chevy Chase, showed up at a Raising Cane’s restaurant to grab some 🍗 chicken 🐔 and to surprise some unsuspecting customers at the drive-thru window. WATCH the TikTok video ► https://t.co/FEyqb0Fk3Y #kslanews12 #christmasmovies #chickentenders pic.twitter.com/vVnNLPO7GS

The Griswold family does not typically enjoy a wholly pleasant or relaxing holiday of any sort. But Chase, star of the National Lampoon’s Vacation series, made a meal especially memorable for hungry visitors and staff members alike.

“In true Chevy Chase form, he asked to jump behind the counter, and hilarity ensued,” the restaurant said in a statement, “as he served up their orders in the drive-thru and inside at the counter.” Already, photos and videos are cropping up online from patrons who were able to process that yes, that is Chevy Chase asking what sauce they want with their nuggets, this is not a drill.

Have you met a celebrity who pulled a surprise like this?