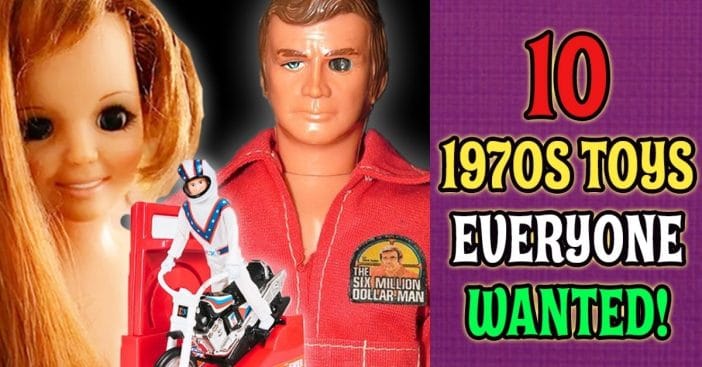 OHMYGOD I GOTTA HAVE IT. We all know that itch. When you see that new toy that ya just have to have. Whether we saw an ad on TV or played with it at a friend’s house – I mean, how did Justin get this? And of course, there was the ever so exciting JC Penny or Sears Wish List Catalog. I mean, my siblings and I spent hours flipping through that ultimate toy wonderland, drooling page after page, circling way too much stuff that Santa was never going to bring, maybe a knock-off version or two, but hey, Santa tried. And sometimes, we conveyed the importance enough, and everything fell into place for us to score that perfect toy.

The new thing we’re convinced will be the MOST fun toy we’ve ever played with in our lives. The one at the top of the list. Today, we’re looking at the most sought-after toys from the decade with some of the best, the 1970s! Be sure to hit the thumbs up button for us, and subscribe to our channel, and no, before we start, there will be no pet rock on this list. No kid had to have a pet rock. Everyone in America just collectively lost their minds for 6 months. So let’s get to the goods, the toys…

Evel Knievel dominated pop culture in the mid-’70s with a series of thrilling, death-defying motorcycle stunts that grew more and more outrageous as the years went by. This being America and all, that naturally led to a remarkably successful line of Knievel toys that sold more than $125 million worth of units in just six years. And undeniably the coolest of all the stunt-based toys was the Evel Knievel Stunt Cycle. Marketed as the 7-inch daredevil, the Stunt Cycle could blast off jumps of up to several feet high, fly through the air, and much like the toy’s namesake, surprisingly land safely before speeding off into the sunset. The toy was so cool that people on the internet today still release videos of them doing tricks with the Stunt Cycle. Much safer than the life-size version.

RELATED: 10 Dangerous Toys That Were Pulled Off the Market

Generations of kids have grown up with the song: “Weebles wobble, but they don’t fall down.” A testament both to the power of advertising and the simple joy of that ’70s classic, the Weeble. A Weeble was an egg-shaped toy painted to look like something cute – an animal or small child for example – that when knocked over would miraculously roll back to an upright position. Just don’t try this with a real small child.. While deceptively simple, the science behind the Weeble was actually quite complicated: the overall shape must have constant positive curvature, from the central vertical axis the shape must be nearly cylindrically symmetrical, and now we’re all asleep. However they worked, Weebles entertained countless toddlers who were convinced that this time surely the Weeble would fall down.

What’s the best thing about having a newborn baby? Everybody knows it’s having to feed it every couple of hours, followed shortly by having to change its poopy diapers! But normal doll babies, unfortunately, don’t poop, so while playing kids are deprived of the joyous opportunity to wipe another human’s butt. Fortunately, in 1973 toy company Kenner introduced the Baby Alive doll that eats, drinks, and yes, “messes” in their diaper. Designed to more closely simulate the challenges of infant care, the doll came with food packets that when mixed with water and spooned into the doll’s mouth would travel through the doll and end up in her diaper. The doll immediately exploded in popularity, and at one point was selling more than 1 million units a day. It’s good to teach future parents that raising a kid is hard work, but it’s definitely a toy made for people who have never actually changed a diaper. And it’s one that has not gone away either as it’s been reinvented constantly, first in the 1990s, then in the 2000s. We got several new versions like the Sip ‘N Slurp doll and Baby Alive Bouncing Babbles—a doll who can bounce up and down, operated by a small internal motor. I’m totally sure that doll won’t turn evil and come after you… certainly, probably.

In 1976 a new action figure hit the shelves in America that would change the course of toys in the US for the next 40 years. These of course were the Micronauts, a series of 4-inch tall cyborg action figures that were famous for having a high number of articulation points – fancy toy speak for places where the figure could move – compared to other toys at the time. But the truly remarkable thing about the Micronauts wasn’t just their innovative design. It was the fact that they were an Americanized version of a toy already super popular in Japan. And this was just the beginning of an avalanche of imported Japanese toys that would come to dominate the US market. Can you imagine the last thirty years of toys without Transformers or Pokemon? Well the Micronauts, super cool in their own right, paved the way for the future Japanese toy behemoths to shine.

Normally when someone uses the term “revolutionized” it’s almost all hyperbole – no real revolution actually occurred. But to say that video game company Atari revolutionized toys in the 1970s is no exaggeration at all – the company basically invented the home video game system during the decade. In 1975 Atari released the first video game you could play at home, Pong. While it may not seem that groundbreaking today when it was released Pong blew people’s minds. Suddenly there was a video game, before only playable in massive arcades, that you and your family could enjoy on your own tv. Whoa. Then in 1977 Atari upped the ante to a whole new level by releasing the Atari 2600, the first popular microprocessor-based gaming system that you could swap games in and out of. It was the coolest toy around in the late ’70s, the first true video game system, and led to today’s billion-dollar video game industry. Game on.

In 1970 Parker Brothers released the first Nerf ball, and the world of toys changed forever. Marketed as the world’s first official indoor ball, the 4 inch Nerf ball claimed you can, “Throw it indoors; you can’t damage lamps or break windows. You can’t hurt babies or old people.” And it was mostly true. Made of a springy foam, the Nerf ball would harmlessly bounce off of almost anything, and kids instantly fell in love with it. Over 4 million were sold in its first year, and soon Parker Brothers had released a basketball game called Nerfoop and the Nerf football. Probably Nerf’s most popular products today are their wide range of foam dart guns, as Nerf continues to be a must-have for every kid in America.

What’s one of the biggest problems with action figures? There you are, playing your little heart out, having all of the fun, when suddenly blam, the cheap plastic figure breaks and fun time is over. Well, the geniuses at the Kenner toy company solved this problem when they released Stretch Armstrong in 1976. Stretch Armstrong was a short, muscle-bound man in black wrestling trunks that stood about 15 in. high and at first glance, was unremarkable. But the figure was filled with a gel very similar to corn syrup that allowed it to be stretched to an incredible 5 feet before slowly shrinking back to its original shape. This allowed for hours of fun stretching the poor man to his breaking point between tree houses, tire swings, a dog’s collar – you name it. And even if stretch developed a small tear, he could be fixed with simple plastic adhesive bandages that came with the toy. Perfect for the kid who liked to play hard.

In 1977 the Mattel Electronic Football game was released, a release that led to the next 30 years of handheld games – everything from the Game Boy to Tamagotchis. While rudimentary by our standards, the Electronic Football game was amazingly cool for kids in the ’70s. Roughly calculator-shaped, the game used a system of LED lights to let you play a basic game of football. The brightest light was your quarterback, and you used buttons below the screen to avoid the defense, represented by dimmer lights. While it was technologically outpaced by systems like the Atari 2600, the Mattel Electronic Football was handheld and 100% portable. You could take it on long car rides, boring school classes, and even tedious church services, making the game a must-have for ’70s kids.

Some action figures come with so many accessories that it’s almost overwhelming. Scores of helmets, weapons, and clothes that would almost instantly get lost made the toys less fun in the long run. But not the Six Million Dollar Man Doll. Based on the hit Lee Majors’ ’70s show, the Six Million Dollar Man action figure came with all the accessories already built-in. He had a bionic eye that you could peer into through an eyepiece in the back of his head, and by twisting his head and pushing a button on his back, the Six Million Dollar Man could lift up to two pounds in with his bionic arm – remarkable for a 10-inch high doll! Later editions of the toy featured a bionic grip and a karate-chopping arm, and kids continued to be unable to resist the allure of Steve Austin as the ultimate action figure. Plus he wore a super cool red tracksuit – hard to beat that.

And these were the most popular had to have toys of the 1970s. Now go play! Which did you play with every day? Did we miss any toys that you absolutely loved? Let us know in the comments below, we read every one!