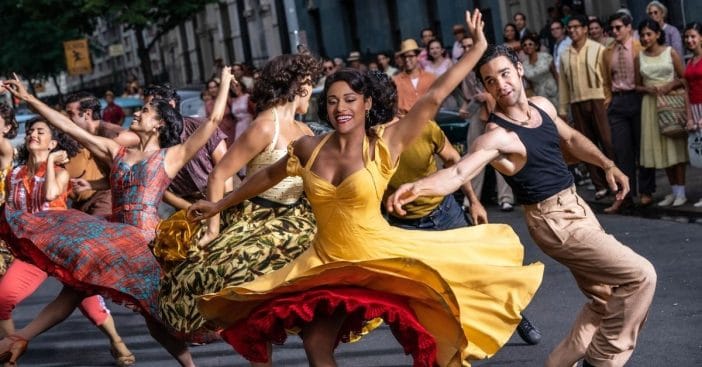 It’s the year of classics come again! The reviews are in for Steven Spielberg‘s modern reimagining of West Side Story, which premiered in New York City on Monday. The film is directed by Steven Spielberg and serves as his first full-length musical, with Rita Moreno, who played Anita in the 1961 film, serving as executive producer. Tony Kushner of Angels in America fame served as the film’s writer. How was this meeting of the minds received by viewers?

Reviews from critics who attended the screening are pouring in via social media. Reviewers sent out pictures from the premiere with a short synopsis of their feelings: what worked, what did not, and their overall final opinion of the film. So far, it’s received glowing commentary with a few critiques.

In an era of reboots and reimaginings that can hit spectacularly or miss devastatingly, it would be easy to go into a modern retelling of West Side Story with low expectations. That might have been the thinking behind film critic Robert Daniels who called it a “shocker” that “I didn’t dislike Spielberg’s #WestSideStory.” His review of West Side Story notes that “It’s not a patch on the original (what is?)” but the cast gave a strong performance that helped offset some less pleasant special effects and lighting choices.

WEST SIDE STORY is *phenomenal.* Steven Spielberg has been talking about making a musical for almost his entire career, and this was worth the wait. This is top-tier Spielberg.

Chief Slashfilm critic Chris Evangelista voiced a similar sentiment, calling the film “phenomenal.” He went on to write, “Steven Spielberg has been talking about making a musical for almost his entire career, and this was worth the wait. This is top-tier Spielberg.” Looking at the team behind bringing this reimagining to life, senior entertainment writer Esther Zuckerman succinctly commented, “it’s sorta like you shouldn’t underestimate steven spielberg and tony kushner.”

What this means for future projects

One critic cited the visual effects as “jarring” and that these choices made the cast look washed out. one common thread among critiques includes the performance of Ansel Elgort, who played Tony opposite Rachel Zegler’s Maria. His performance has been called “a bit flat” and, more concisely, “eh.”

I was hoping that WEST SIDE STORY (2021) would sate my decades-long desire for Spielberg to do a musical. Alas, it is so beautifully shot and staged, such an absolute schooling of the usual musical directors, that I fear I now want him to make two or three more.

The rest of the cast, however, earned glowing praise, including Ariana DeBose, David Alverez, Zegler, and a returning Moreno. This “tremendous ensemble cast” provided a perfect modern retelling for the next generation, solidifying their own strengths as actors, and causing fans of Spielberg to crave more feature-length musicals from him. “Alas,” writer and editor Jesse Hassenger happily mourns, “it is so beautifully shot and staged, such an absolute schooling of the usual musical directors, that I fear I now want him to make two or three more.”

How does this review measure up against your expectations for 2021’s West Side Story?

Click for next Article
Previous article: The Reviews Are In: ‘The Waltons’ Fans Not Impressed With New Reboot Film
Next Post: Matthew McConaughey Decides If He Will Run For Texas Governor Or Not