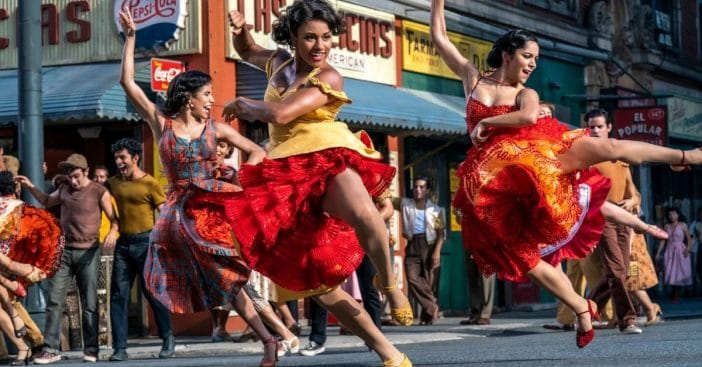 See the new trailer on that TV there? What can that modern remake be? It is the full trailer for Steven Spielberg’s West Side Story 2021 with a new cast and look. The urban twist on Romeo and Juliet is based on the Broadway production of the same name.

The last film adaptation came in 1961 and starred Natalie Wood, Richard Beymer, Rita Moreno, Russ Tamblyn, and George Chakiris. Moreno is involved in this 2021 film, but the screenplay is reported to follow the Broadway version more than its 1961 predecessor.

Watch the trailer to the new ‘West Side Story’ now

On Wednesday, Disney and 20th Century Studios released a full trailer for the new West Side Story film. It lasts two minutes and fifteen seconds and gives viewers a sweeping view of the passionate romance between Maria and Tony, who find themselves as star-crossed lovers embroiled in conflict between the rival gangs the Sharks and the Jets.

Maria’s own loved ones disapprove of the match, though Maria counters, “I’m a grown-up now. I’m going to think for myself.” For this rendition, Rachel Zegler plays María Vasquez, Ansel Elgort is Tony, Arianna DeBose is Anita, and David Alvarez is Bernardo Vasquez.

What the film is and is not

Zegler has said that West Side Story 2021 is not a remake, but rather a reimagining by Spielberg, who serves as director and co-producer. Indeed, available scenes and clips show it is not a shot-for-shot recreation or reenactment of the same choreography, scenes, and lines.

“We’re not trying to recreate, frame for frame, the 1961 film,” she stressed. “That film exists as this incredible piece of pop culture that everyone has seen and been affected by in some way. I don’t think any of us would ever try to recreate that. There are things to improve on and things to address.”

Specifically, Zegler says she and her peers were told throughout auditions and rehearsal, “We are making a movie of the original Broadway musical. This is our take on a story that every-one has heard, and knows so well, and really loves.” Similarly, Romeo and Juliet will still provide significant inspiration, like in the Broadway production, with West Side Story 2021 also exploring timely and culturally relevant themes like identity.

Will you watch this reimagining?

Click for next Article
Previous article: Reba McEntire Rescued From Historic Building As Its Stairwell Collapses
Next Post: Sharon Osbourne Shares Death Threats She And Ozzy Received After ‘The Talk’ Exit