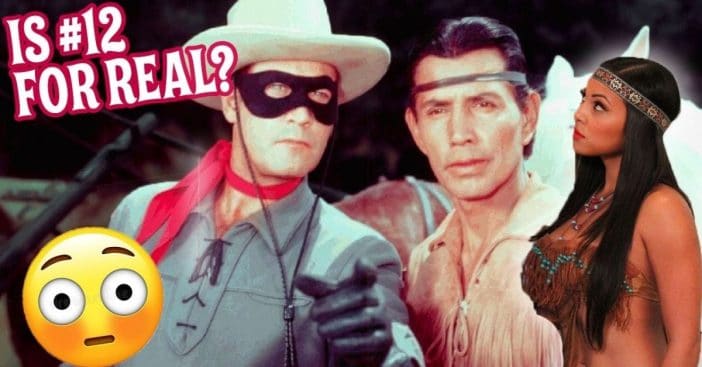 Saddle up, partner, we’ve got a remarkable ride ahead of us. I present to you… The Lone Ranger, not just the scourge of outlaws across Texas, but a pioneer behind an entire emerging genre!

The Lone Ranger’s life may be steeped in mystery, but this classic 1950s series has plenty of secrets and wild stories ripe for the picking. How did an ABC series turn an opera song into a horseback riding anthem? And why was the US Postal Service Involved? Without further ado… let’s get into it.

Before we could even SEE the Lone Ranger with his wide-brimmed hat and trusty mask, his adventures were first heard, on the radio. The Lone Ranger and Tonto premiered with the same title, playing on WXYZ Detroit. Credit is given to the station owner, George W. Trendle, and the show’s writer Fran Striker.

RELATED: 8 Of the Most Notorious Outlaws In Texas History

Turned out, the radio show was a huge hit. But they didn’t make the transition to the small screen just yet. First, Striker penned an entire series of books. The Lone Ranger even got his own comic series, and later on, films! But it was the show, running from 1949 to 57, that put an image to this iconic character and cultural phenomenon.

A few faces were behind the ranger’s mask while still on the radio, with the Ranger being voiced by … wait it still can’t be a mystery, right? Well, Earle Graser gave life to this crime fighter for over 1,300 episodes, but he wasn’t receiving praise during the performance, that’s because the creators decided that the Lone Ranger must remain a mystery. Graser was required to restrict his radio acting, solely to the lone – or lonely to the sole, something like that. So his identity was kept secret from the general public. Apparently one night Graser was at a nightclub when a prize was offered for the best “Hi-Yo, Silver!” should, most like the Lone Ranger. Naturally, Graser entered the competition…. and didn’t win.

The Lone Ranger as a TV series is generally agreed to be the most recognizable and most popular version of the character. I mean, TV right? This figure became a cultural icon. But that’s not the only way this series shaped TV.

It shaped an entire genre. Before Gunsmoke and Matt Dillion blazed into the saloon or Zorro cut down the baddies, even before Wagon Train found land to settle in, there was one: The Lone Ranger. Although some credit Hopalong Cassidy being the first western series in June of 1949, it was mainly edited from previous films, so when the Lone Rangers rode to town in September of ‘49, It was so successful it stayed for most of the ’50s, so this program deserves the credit for establishing a long-running western series. We’ve got rewinds on many western shows, and it’s all thanks to the one that paved the way for the rest. My hat’s off to you, Mr. Reid.

We all have our national heroes, some real and some fictional – that embody the values and feats we wish for ourselves and those around us. And The Lone Ranger has time and again been named such a person.

So much so, that in 2009, when the US Postal Service put together a commemorative stamp collection honoring early and influential US shows, the Lone Ranger was of course featured. The stamp shows the Lone Ranger as played by Clayton Moore, along with Silver, of course! Also Among that collection, Lassie, The Tonight Show, The Twilight Zone, I Love Lucy, and other titans from those years. Did anyone out there grab some of those retro stamps for your collection? Let me know in the comments.

Reid took up the title of the Lone Ranger, but also a term of enduring friendship, thanks to Tonto and the phrase “kemosabe.” Within the franchise’s lore, kemosabe is Tonto’s name for our masked hero, and comes from a Potawatomi term meaning trusted scout or friend. In reality, the term is pronounced gimoozaabi, and means another person looks out for another, behind the scenes.

Radio show director Jim Jewell got the idea from a boy camp called Kamp Kee-Mo Sah-Bee, just off Mullett Lake, at the top of Michigan near the great Lake Huron.

Whistle while you work… If you can

You knew you were in for a wild western adventure when you heard that famous cry of “Hi-Yo Silver! Away!” But As empowering and blood-pumping as that call was, it existed because of NOT being able to do something.

You see, according to George Seaton who voiced the Lone Ranger for the test shoots and in very early episodes, the script originally called for the Ranger to whistle for his trusty horse, Seaton couldn’t pull off an epic whistle, So, as he tells it, he invented that cry to use instead. Wouldn’t you know, it’s stuck around ever since. On the radio, this sound acted as an important sound cue so listeners knew a riding sequence was beginning.

But as for the start of each episode, the shouts of “Hi-yo Silver” have been sampled by the longest-tenured original Ranger himself, Earle Graser, as well as the companionable Fred Foy, famous for his breathless intonation that became popular to imitate, as Foy is known as the greatest announcer-narrator in the history of radio drama.

Already a popular radio show, The Lone Ranger TV series enjoyed immediate popularity. By the 1950s, its fame was so apparent, ABC knew it had to make a few accommodations. Typically, it aired on Thursdays and didn’t post any reruns. With one exception: for a short while, ABC also aired it late on Fridays, in case viewers missed the usual Thursday slot.

No matter the situation the Lone Ranger found himself in, he could never stay captured by outlaws or lawmen for long. They kept these moments short so the ranger would never be unmasked. And what was never hidden, was the Lone Ranger’s moral code. The Lone Ranger led the fight for law and order across the plains. To make him as clean a hero as possible, the writers made sure the ranger never drank or smoked, and he only used violence when necessary.

This last bit even played into his wardrobe. His origin story changes a bit between radio and TV, but overall, the Lone Ranger gets his name by being the lone survivor of a horrible tragedy where he lost family and co-rangers. His mask is made of fabric from his late brother’s shirt, and his vest has silver bullets to remind the ranger of the silver mine by his childhood home. And, in keeping with his code of honor, he uses the expensive metal for his gun to remind himself life is precious and should not be fired upon lightly.

The show may be named for one man, but he comes as half of an inseparable duo; what would the Lone Ranger be without Tonto? The name is short and catchy, but it actually means “stupid” or “fool” in Spanish, so in Spanish dubs they rename him Toro, meaning “bull,” which is certainly more powerful if you ask me! But, among the Michigan Native American languag, it’s supposed to mean “wild one,” also very adventurous and inspiring! Tonto was created so the Lone Ranger would have someone to talk to, and it worked brilliantly.

As for Tonto’s actor, scriptwriter Fran Striker insisted on an actual Native American for the TV show. Jay Silverheels was the son of a Mohawk chief living in Ontario’s Six Nations Reservation. Lacrosse traces its origins back to the indigenous of Canada, and Silverheels himself was a star of the sport before he decided for a total change of scenery and moved to Hollywood. That athleticism was a good thing too, it gave him a leg up as a skilled stuntman.

You lean back in a plush chair and hear an 1800s overture by Rossini. Surrounded by all this fancy pageantry, you feel… Ready to ride off into the sunset on your trusty steed! Music tells half the story of any production. It’s that final ingredient in getting a scene’s flavor just right. So, an icon like the Lone Ranger needed a memorable tune to complete his whole aura – appearance, actions, AND sound.

Throughout the radio program, TV show, AND movies, The Lone Ranger’s theme has been none other than William Tell Overture, one of composer Rossini’s very last of his 39 operas, and dates all the way back to 1829. And it wonderfully sets the fast-paced mood for The Lone Ranger, but the influence went both ways. These days, William Tell Overture is now an opera that when people hear it, they think less fancy ballgowns and ornate stages, and instead think of horseback riding, There’s even a phrase, that goes, quote, “An intellectual is one who can listen to the William Tell Overture without thinking of the Lone Ranger.” Yeah, that’s not happening here…

The Lone Ranger is one of those few characters that’s appeared in every entertainment medium out there, and not like the Simpsons making a spoof of it.

It started with radio, then moved to television. We touched on the comic book issues, with the original Dell Comics getting 145 issues, and there’s been updated releases too! Then, of course, there were films throughout the decades. Silver even rode up in cartoon form, drawing in younger fans as we all crowded around for weekend fun! Jump to 1991, and he even got his own video game. The Lone Ranger will never die.

All good things come to an end

Like a meandering survivor after a hard day, The Lone Ranger traced a ragged path through success to the end of the television series itself. It ran for 221 episodes across five seasons in nine years. Briefly, fans had to reconcile with Clayton Moore leaving the show to be replaced by John Hart. The change was not popular and lasted 52 episodes. By the show’s fifth year, ownership transferred from the radio show’s station owner Trendle to producer Jack Wrather. One of his first moves was bringing Moore back.

More changes came in ‘57, like investing money into filming in color. The Lone Ranger may have started as the first of its kind, but by the mid-’50s, it wasn’t alone by a long shot. It officially had competition from Maverick, Gunsmoke, Cheyenne, and many more.

Then, Wrather made the biggest choice of all: he decided not to negotiate with ABC for another season, All this, in the hopes of turning the Lone Ranger from a small screen hero into a film franchise. So, in place of another three dozen episodes throughout the year, we got 1956’s Lone Ranger film and 1958’s The Lone Ranger and the Lost City of Gold. Hmmm, Was it worth it?

This was TV at its roots, a powerful formative start to the western genre as a whole. So, what surprised you most about the first of its kind, The Lone Ranger? Did you or your parents listen to the radio show back in the day? Or was Clayton Moore always your Ranger? Did anyone out there enjoy the most recent Johnny Depp as Tonto 2013 version pictured above, sad to say I couldn’t push myself to watch that one. Let me know in the comments if it’s worth my time.