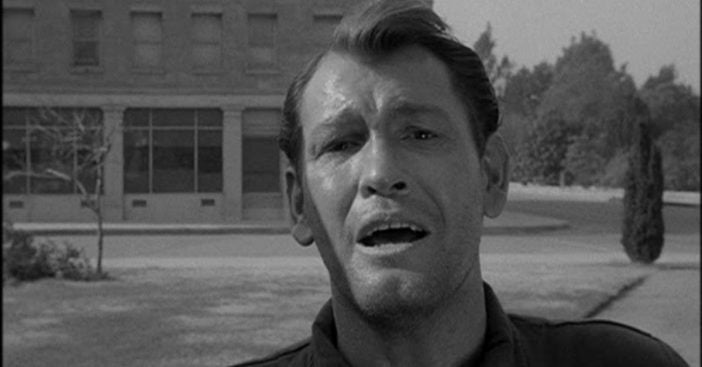 The Twilight Zone first premiered in October 1959 and no one knew just how legendary the show would go on to be, even decades later. With the incredibly compelling storytelling techniques of host Rod Serling, combined with each episode’s creepy yet enticing nature, it made for a very successful show back then and now.

Do you remember the very first episode of The Twilight Zone? The episode titled “Where Is Everybody?” follows a man dressed in a U.S. Air Force flight suit with no recollection of where he is or how he got there. Even when he finally finds proof of other life, the apparent female appears to just be a mannequin. Creepy, right?

Do you remember the very first episode of ‘The Twilight Zone’?

“Where Is Everybody?” wasn’t even originally supposed to be the show’s pilot episode. The original pilot episode was originally to be “My Happy Place,” where society deems people over 60 no longer useful. However, CBS executive William Self rejected the story, feeling that the material may be too dark. That’s when Serling took a step back from his original idea and proposed “Where Is Everybody?”

RELATED: Do You Remember ‘Bonanza’s’ Creepy Tribute To ‘The Twilight Zone?’

Charles Beaumont of The Magazine of Fantasy and Science-Fiction praised the episode, saying that he “read Serling’s first script… Old stuff? Of course. I thought so at the time… but there was one element in the story which kept me from my customary bitterness. The element was quality. Quality shone on every page. It shone in the dialogue and in the scene set-ups. And because of this, the story seemed fresh and new and powerful. There was one compromise, but it was made for the purpose of selling the series.”