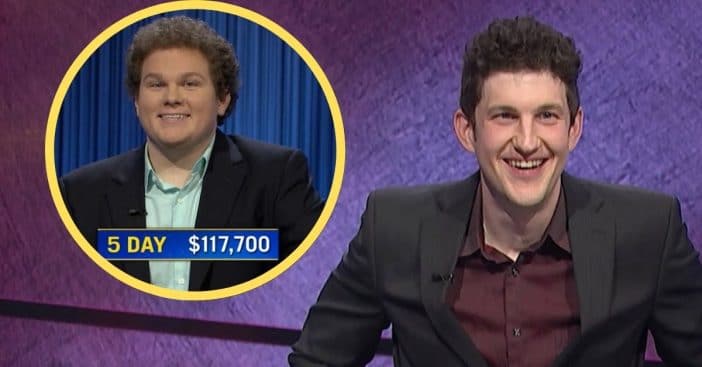 Matt Amodio‘s winning streak came to a recent end, paving the way for a new champion to rise up. However, Amodio feels this new rising star, Jonathan Fisher, was given an easier time than others – especially himself – when the pressure was at its highest.

It was not during the competitive segment of Jeopardy! itself. Fisher was not granted leeway when answering a question. Instead, it was during the break, when contestants endure the nerves countless people suddenly feel when asked “Tell me something interesting about yourself.”

Matt Amodio noticed new rising star Jonathan Fisher did not have to do a big ‘Jeopardy!’ ritual

Traditionally, Jeopardy will have its first segment of competition, then pause the game proper for a commercial break. The contestants don’t stay idle, however, thanks to the host, who will talk to them seeking one specific thing: some interesting story about themselves. Across over 8,000 episodes and counting, participants have been asked by the host to share an engaging anecdote from their lives.

Host Mayim Bialik took a different approach when speaking with Fisher in Monday’s episode. “So, you have secured a position in the next Tournament of Champions, you might go head-to-head with Matt Amodio,” she noted, before then asking, “What do you think that would be like?”

Meanwhile I'm left flailing with "I listen to music sometimes" and "There was a bat. Did it do anything? No, it just sat there and then went away" https://t.co/SywvDQ221K

It is to this question that Fisher responds, “It would be amazing. It’s one of the highlights of my life to be here but to also have played against Matt, so to get to do it again would just be icing on the cake.” Bialik agreed that she “would love to see” that unfold, and that was the end of his discussion with her. That is where Amodio noted the change in routine.

Matt responds on Twitter, and so do ‘Jeopardy!’ viewers

Yes, thousands upon thousands of dollars are on the line during any game of Jeopardy!, as well as the chance to advance in a highly popular game show that cemented its own place in industry history and has plenty of room for trivia-savvy hopefuls. But the real pressure comes when a contestant is suddenly asked to think of an interesting story about themselves, which is of course when all interesting anecdotes disappear from immediate memory. “Totally unfair,” Amodio called it when he saw the clip of Bialik and Fisher on Twitter. “#Jeopardy just *gives* @JFishtheDish a free pass on an anecdote? Meanwhile I’m left flailing with ‘I listen to music sometimes’ and ‘There was a bat. Did it do anything? No, it just sat there and then went away.’”

Followers who saw his retweet were quick to join in on the fun. They paid special attention to stories where Amodio struggled with appliances, one writing, “Don’t be so hard on yourself, your anecdotes were good! Now we know you struggle with the dishwasher and escalators,” echoing another user who ominously wrote, “Let’s not forget about that time you did the dishes.” As far as favorites, another user favors “when you got the scar on your hand going apple picking.”

Your stock of stories, given your age, was quite surprising! Not as impressive as your breadth of knowledge, but still impressive!

Given Amodio’s track record, in which he made history as one of the highest Jeopardy! winners to date, he had to think of a lot of anecdotes: 38, to be exact. And that is precisely what other Twitter users praised, noting, “Your stock of stories, given your age, was quite surprising! Not as impressive as your breadth of knowledge, but still impressive!” Throughout all this back-and-forth about personal tales and new victors, Amodio also offered Fisher a heartfelt congratulations for winning – especially on a Monday.

What stories might be shared for the impending Fisher versus Amodio round?

👏👏Congratulations, @JFishtheDish! Winning #Jeopardy on a Monday can be hard!👏👏

Click for next Article
Previous article: Rumer Willis Heats Things Up With New Photo Posing In Only Overalls
Next Post: Gwyneth Paltrow Says She ‘Almost Died’ When Giving Birth To Daughter Apple