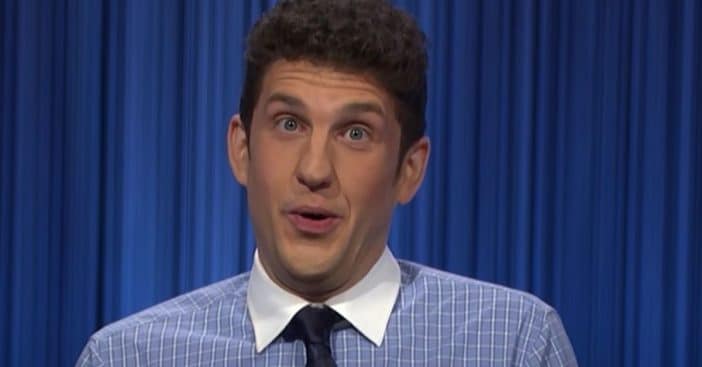 Jeopardy! contestant Matt Amodio is officially in second place for the most consecutive wins of all time. He recently passed up James Holzhauer by receiving his 33rd win. He would still have to beat Ken Jennings, who currently holds the number one spot after winning 74 games in a row. Wow!

However, some viewers aren’t happy to see Matt continue to win because he has an “annoying” habit on the show. So many fans complained that Jeopardy! had to officially put on the record that Matt wasn’t breaking any rules.

The annoying habit people are referring to is that Matt answers a question starting with “what,” no matter what the answer is. For instance, if the answer is a person, he won’t say “Who is,” but rather “What is.” It doesn’t quite sound right sometimes but apparently, it isn’t against any rules!

RELATED: ‘Jeopardy!’ Fans Are Wondering If Matt Amodio Is About To Lose After His Recent Tweets

When James tweeted Matt about his win, some fans took the opportunity to call Matt out. One person tweeted, “James, at least you and Ken @KenJennings knew proper English, this answering what to everything is so disturbing… doesn’t matter what the rules say… (A person is not a what, they are a who..).”

James, at least you and Ken @KenJennings knew proper English, this answering what to everything is so disturbing… doesn't matter what the rules say…
(A person is not a what, they are a who..)

Matt said, “I have a strategy where I form all of my questions with a ‘what’s’ at the beginning – then, I can focus on the rest of the clue. Other people have been very upset about me being robotic instead of forming a question differently each time. I was glad that ‘Jeopardy!’ said this was perfectly within the rules. I’ve watched ‘Jeopardy!’ every day of my life, so I knew it was okay.”