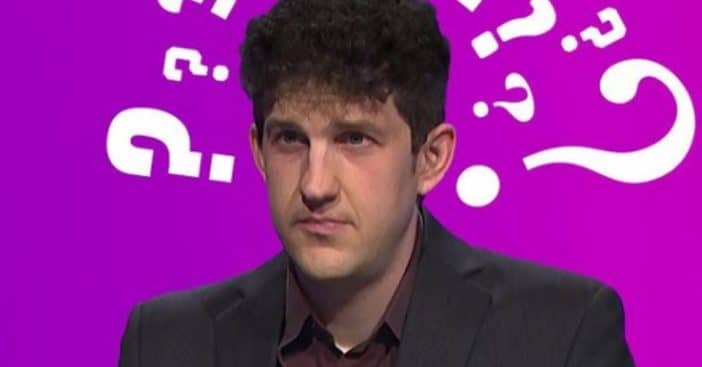 Contestant Matt Amodio has had quite the impressive streak on Jeopardy! He has currently won 32 consecutive games. However, after one of the last shows, he tweeted something that had fans questioning if his reign was about to end.

He also recently passed the $1 million won mark. Matt tweeted, “Wow, 30 wins. I know whatever happens next, this has been the ride of a lifetime on #Jeopardy. Thanks to all of you for tuning in for all of the ups and downs!”

Many fans began to tweet him back, wondering if he is about to lose. Of course, the show is taped in advance so Matt knows when he lost before it airs on television. On the day after his tweet, he won again, which gave many fans a sigh of relief. He also wrote, “I’m proud of my run on #Jeopardy, but the thing I may be proudest of is being the reason so many people learn what the rules of #Jeopardy are.”

Matt has also been joking around with another fellow Jeopardy! champ on Twitter. James Holzhauer was poking fun at Matt and challenging him to beat his 32-win streak. Matt responded, “Tomorrow on #Jeopardy I have the chance to remind everybody how much better than me @James_Holzhauer is in literally every way. It would be an honor to be unfavorably compared to a person I admire so much!”

Wow, 30 wins. I know whatever happens next, this has been the ride of a lifetime on #Jeopardy. Thanks to all of you for tuning in for all of the ups and downs! https://t.co/DLSJU0xopF

Find out what happens tonight at 7 p.m.! Matt is competing against Samantha Wells and Thomas Dai. If one of them wins, Matt will finish his streak at 32 wins. If Matt wins, he will surpass James with 33 wins. What do you think is going to happen?

Click for next Article
Previous article: No Patrons Noticed Mick Jagger At Famous Dive Bar, Owner Says
Next Post: There Are Officially No More True Dollar Stores Out There