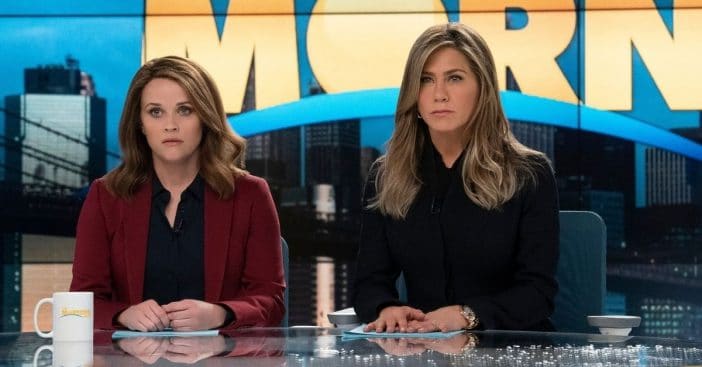 People love a good debate, whether it’s Star Wars vs. Star Trek, pro- or anti-pineapple pizza, or, most recently, Jennifer Aniston vs. Jermaine Jenas, presenter for Britain’s The One Show. She and The Morning Show co-star Reese Witherspoon participated in an interview as their drama series nears its season two premiere.

However, viewers’ attention ended up unexpectedly diverted. Upon questioning from Jenas, the actresses discussed their filming schedules, comparing morning and night routines. However, when Jenas redirected from Aniston to Witherspoon, things turned tense between guest and interviewer. Now, Twitter is divided over who is at fault.

Aniston and Witherspoon tuned in for a remote chat about filming The Morning Show. The discussion turned to the contrast between very early and late filming schedules. “I learned the slow burn that it is. It’s a very vampire state of life and mind that you guys live in,” Aniston outlined. “Everybody comes alive in the middle of the night, and it’s a slow-moving train. I got there at 5 in the morning and the hallways were quiet and people are just slowly waking up, and then all of a sudden, the train starts moving and it gets crazier and crazier. It’s utter chaos.”

At this point, Jenas then stepped in with a question and statement for Witherspoon, “Reese, I’ve got to be honest with you, Jennifer’s pretty much sold it to me that she’s not a morning person.” In response, Aniston appeared surprised and in turn said, “Did I sell that to you?'” Jenas replied, “A little bit, a little bit,” to which Aniston then followed up with, “Did I get a good deal?”

Responding to the incident on ‘The One Show’

Jenas offered a laugh in response to Aniston’s question before adding, “So, what about you, Reese?” Witherspoon at last replied to the One Show host’s query with, “No, I’m definitely a morning person. Jen and I talk about this all the time. I’m the morning person and she’s more of a night person. It actually works out because I do kind of the early morning scenes, and then by 4 o’clock I’m toast, and then Jen starts around 11 and 12, and then she can do the night scenes because I can’t even think straight past 4 p.m.”

Viewers of The One Show engaged in a Twitter debate, with users choosing their side: Aniston or Jenas. Those who sided with the interviewer wrote things such as “Did anyone else catch Jennifer Anniston’s [sic] negative reaction to the male presenter regarding the morning person bit? Awkward,” “Am I sensing a wee ‘attitude’ here?,” and “Jennifer Anniston’s ‘tude in this interview is cringe. She keeps on looking to the side awkward.” However, supporters of Aniston noted, “it’s rude to cut someone off when they’re talking, people need to chill.” Yet another user said that “Jermaine dying on his arse trying to interview Jennifer Aniston.” More comments can be found on the YouTube video of the interview, though these primarily echo sentiments of confusion, that the moment got so much reporting in the first place; some, though, do join the debate and choose a side.

What do you think of the hiccup in the interview? Was it even a standout moment worth debate? If so, what could have been done different?