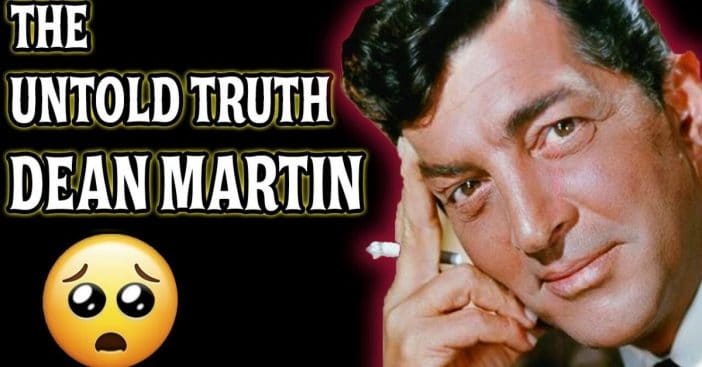 “The King of Cool.” The man who many of us remember for having a voice as smooth as butter, devilish good looks, and a personality so relaxed that anyone felt welcome around him. But Martin wasn’t always the coolest cat in town, and he too had insecurities to conquer before arriving at Rat Pack acclaim.

Today we’re revisiting the man who could do it all, the one Elvis Presley even admired. Dean Martin. Now, let’s learn a little more about the man, the myth, The Dino.

Dean Martin’s birth name was Dino Crocetti. Born in a steel mill town of Steubenville, Ohio on June 7, 1917, a few months after the United States entered World War I. His father was an Italian immigrant and his mother Italian-American so at home the family spoke Italian, Dino began learning English around 5.

RELATED: 10 Little Known Facts About Dean Martin That Might Surprise You

Life was generally rough for poorer families during and after the war. Even more so when the United States passed Prohibition. As a young man, Dino got mixed up in some illegal activity, he delivered bootleg liquor during said Prohibition Era, and he worked blackjack tables in the speakeasies. And if that’s not cool enough, he began competing in boxing tournaments as “Kid Crochet” and he was pretty good at it! ‘Cause, of course, he was.

The contacts he made during this time allowed him to finally step out of the ring and onto the stage. Which is good, too, ’cause his nose didn’t need to be broken more than once. His contacts in the underground world of nightclubs encouraged him to take on the Americanized name of “Dean Martin.” Dean was inspired by the work of Bing Crosby and Frank Sinatra. And Sinatra took a liking to Dean and his early work, which inevitably led to the formation of the now-infamous “Rat Pack.”

Dean Martin first met Jerry Lewis while performing at a club in New York City in 1945, and performed together for the first time the following year in Atlantic City, when Lewis suggested that Martin fill in for the singer. They were so-so at the start But when they dropped the pre-scripted material and began improvising, the part comedy part music blend was beginning to make an impact – crowds absolutely loved the duo! Lewis would run around the stage heckling Martin while he was trying to sing! You could tell just from watching that the two men were having the time of their lives!

The pair eventually landed a contract for a radio program called The Martin and Lewis Show in 1948. And the following year, they moved their show from radio to tv! This allowed the duo to move from New York City to Los Angeles. Dean Martin let out a sigh of relief and happily moved to Los Angeles because, for one thing, the buildings were shorter than the Big Apple. Ya see, Martin refused to ride in elevators because of severe claustrophobia. Supposedly, he called elevators “coffins” and he would climb several flights of stairs before getting into one. Talk about dedication. Another plus of Hollywood was the paycheck.

They were the hottest duo in town and their wallets were thick. When Lewis and Martin signed with Paramount Pictures, their contract allowed one film outside the studio every year with their own company, York Productions. The first starring flick of that venture was At War with the Army, but the recipe just wasn’t right, the chemistry was more Lewis Versus Martin, instead of the friendly banter we came to love. During this time they were performing regularly on The Colgate Comedy Hour, and their act just continued to improve. They adlibbed to perfection and often broke out of character, smashing down the fourth wall and becoming nationwide icons in the meantime. Such a dynamic and diverse team, that their fans scaled the gauntlet. And we can’t forget 1953’s The Caddy, a simple plot told in reverse golf comedy, but the film gave birth to Dean’s lovely performance of “That’s Amore” – which would become a multi-million seller and one of his signature songs. The tune also appeared in the closing credits of Rear Window and is regarded as the theme song to 1987’s Moonstruck. That’s love, after all.

One of the pair’s final films was one of their best, Artists and Models in 1955. The pair are roomies and together with neighbor Shirley MacClaine in her second-ever film role, it’s just a hoot and holler of a good time. But the tension between the duo was mounting, and the end was near.

They both had issues with the partnership, led by insecurities and frustration. Dean Martin was tired of being boxed into limiting romantic leads. While Lewis’s comedic genius showed the brightest, outsiders often credited Jerry Lewis with being the brains of the operation, and it continually bothered Dean. The final straw came when Look magazine featured the duo but decided to crop ole Dino out of the cover image entirely. Ouch. That’s NOT amore.

Frustration came to a boil as Martin angrily told Lewis that he was nothing to him but a dollar sign. And 10 years after the pair’s sparkling debut, the shine had worn off, and The men parted ways and embarked on their own solo careers. According to Lewis, the two didn’t speak privately for twenty years, to which Jerry later commented quote, “the stupidity of that, I cannot expound on. The ignorance of that is something I hope I’ll always forget.” Leave it to fellow Rat Packer Frank Sinatra to secretly coordinate a reunion on Lewis’s annual Labor Day telethon in 1976. It was a long-awaited embrace that allowed America to breathe a sigh of reconciliation. Watching a comedy duo that brought so many of us joy, back together once again.

Dean Martin’s solo career soared to new heights, yet he still avoided elevators. He signed a record deal with Capitol Label, took grittier film roles, and joined the infamous “Rat Pack.” He was without a doubt a bonafide triple threat. He was a part of some truly fantastic films. Beginning with 1958’s The Young Lions, co-starring with Brando and Montgomery Clift. Then it was possibly his best film of all time, playing the drunk ‘Dude’ – quite literally, in Rio Bravo alongside John Wayne and Ricky Nelson.

Next, he appeared full rat pack in the original Ocean’s 11 with Frank Sinatra and Angie Dickinson. And we have a terrific deep dive on Angie Dickinson, so check that one out next. Dean Martin eventually left Capitol Record to join Frank Sinatra’s new Reprise label, and many thought leaving all that success at Capitol was a mistake, but of course, his next few singles were just as successful, with his signature tune “Everybody Loves Somebody”, even knocking the Beatles’ “A Hard Day’s Night” off the US Top Spot in 1964. And how funny is it that neither he nor  Sinatra could even read music?!

Next up for the jack of all trades was The Dean Martin Show, which ran from 1965 to 74. This weekly NBC comedy series won Martin a Golden Globe. Martin’s stage presence was often that of a drunk crooner, but his daughter and close friends confidently state that it was all an act, his glass most of the time simply containing apple juice. He was a true showman. Not a drunk. Did you know that Dean had a passion for golf and released a signature line of golf balls in the seventies? He hosted the Dean Martin Tucson Open from 72-75 on the PGA Golf Tour.

Dean Martin’s career began winding down in the mid-70s. His final starring role was in the 1975 movie Mr. Ricco. And he recorded his final album with Reprise titled Once in a While.

“Everybody Loves Somebody Sometime”

Dean Martin loved his family, he was married three times and had seven biological children and one stepdaughter. When he wasn’t working he spent all his time with them. And Several of his children followed dad’s footsteps into showbiz. Tragically, his son Dean Paul Martin was killed in a plane crash with the California National Guard in 1987. Martin was overwhelmed with grief and Sinatra organized a tour to help him cope. The tour began in 1988 but sputtered due to Martin’s broken heart, and the fact that Sinatra had booked extremely large venues, which didn’t allow their act to play as tight and personal.

Dean Martin performed his final Vegas show in 1991. He was diagnosed with lung cancer in the fall of 93 and he rejected surgery that could have prolonged his life. He left the public light in early 1995 and passed away on Christmas Day the same year. Dean Martin never let life beat him down. He climbed the ladder from peddling bootleg liquor to being one of the most iconic stars of all time. The epitaph on his grave reads: “Everybody Loves Somebody Sometime” – a nod to his truly wonderful song. Dean, thank you for the incredible tunes and laughs when we needed them most.

So, let’s toast to Dino… What was your personal favorite movie that he was in? Do you have a favorite song that he crooned? And who out there was lucky enough to see The King of Cool perform live? Let us know in the comments below, and let’s remember Dean together.

Click for next Article
Previous article: Steve Martin Recalls His Awkward Encounter With Elvis Presley
Next Post: Michael Keaton Opens Up About His New 9/11 Film ‘Worth’