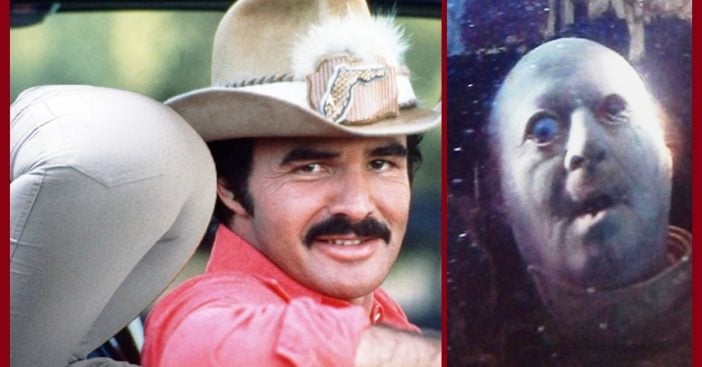 There are some movies that come to absolutely just define the decade they were released in. Think The Graduate from the ’60s or Back to the Future from the ’80s. You couldn’t imagine those movies being released in any other decade – they just wouldn’t work then. They belong to the place and time they came out in, a snapshot of American life at that time.

Today we’re going to be examining some of the movies that defined perhaps the greatest decade for movies ever, the 1970s! Now, it’s time for me to make you an offer you can’t refuse.

In 1975, a film swam into the theaters that would change Hollywood forever. The summer smash that for many kids transformed the beach into a place of terror and gnashing teeth. Despite being helmed by a relatively unknown director – Steven Spielberg – I looked it up, he’s had a pretty good career since – and production being plagued by sinking boats, malfunctioning mechanical sharks, and two lead actors who hated each other, Jaws took a big bite out of 1975’s box office and became the highest-grossing movie of all time. For three years at least. Jaws was the first true Hollywood blockbuster and forever changed the way studios made movies, paving the way for everything from Marvel to The Matrix.

RELATED: The Top Ten ’70s Movies That Definitely Made You Cry

Much like its titular character, the movie Rocky was the story of an underdog persevering against all odds to miraculously rise to the top. Made for a paltry $1.1 million dollars in 1975, Sylvester Stallone’s tale of a small-time club fighter who gets a shot at the heavyweight title was a surprise hit, grossing over $225 million, winning theOscar for Best Picture, and making its lead into one of Hollywood’s biggest stars. Stallone became one of the few people to ever be nominated for the best writer and best actor academy awards for the same movie, and helped turn the phrase “beat your meat” into a respectable pastime for a young man. And we can’t forget Rocky’s memorable theme song: Perfect to hum while sprinting up art museum stairs, or just to have stuck in your head on repeat all day! Deep in your Mind’s Eye -of the tiger.

‘All the President’s Men’

In mid-’70s America was reeling from the biggest political scandal in the country’s history. In 1974 for the first time ever a sitting president resigned their post – Amidst the Watergate scandal and almost certain impeachment and removal from office, Richard Nixon fled the White House, leaving behind a nation in existential crisis over the future of its democracy. Fortunately, Americans had movies like All the President’s Men to help process their trauma. Starring Robert Redford and Dustin Hoffman as the two reporters who, with the aid of their source “Deep Throat,” helped uncover the truth behind the Watergate break-in, All the President’s Men was a riveting political drama that helped an ever more cynical nation come to grips with one of the darkest political chapters in its history. So nice, light, midafternoon fare.

Simply, one of the biggest things to ever happen in pop culture. If you haven’t seen it, because I assume you’re a psychopath, then you at least get the general idea. Space, lightsabers, the ultimate story of good vs evil. Despite a very modest budget, Star Wars was an instant smash hit, grossing over $750 million dollars – which adjusted for inflation makes it the 2nd highest-grossing movie of all time. With cutting-edge special effects, one of the most recognizable soundtracks of all time, and fantastic performances from its lead actors, Star Wars proved that a science fiction film could be a massively successful mainstream hit. And everything from Alien to Guardians of the Galaxy owes it a massive debt.

You can’t talk pop culture in the late ’70s without talking about disco, and you can’t talk disco without mentioning Saturday Night Fever. From its opening scene of John Travolta stylishly strutting down the streets of Brooklyn, paint can in hand, Saturday Night Fever perfectly encapsulated the dance craze that was sweeping the nation in 1977. With its perfectly choreographed dance club scenes, massive collars and bell bottoms, and portrayals of pre-AIDS sexual liberation, the movie distilled disco down to its essence – let’s have a good time tonight, because who knows what’s going to happen tomorrow. But Saturday Night Fever wasn’t just a perfect snapshot of disco, it was also a poignant and heartbreaking portrayal of urban coming of age – a window into the soul of an American family. All set to its timelessly awesome soundtrack anchored by the Bee Gees. And we learned two things: how to stay alive. And don’t touch the hair.

The second half of the 1970s saw numerous Vietnam War movies released in the US, as the country attempted to process a decade-long conflict that killed over 58,000 Americans and more than a million Vietnamese. And none of them captured the horrors, the mind-numbing idiocy of war quite like Apocalypse Now. Francis Ford Coppola’s adaptation of the classic novel Heart of Darkness followed the journey of Captain Willard in central Vietnam, sent on a covert mission to eliminate Colonel Kurtz, a renegade Green Beret who had gone completely mad. The film hops from one surreal scene to the next, from a surfing-obsessed cavalry commander to soldiers on acid watching a night-time bombardment like it was the fourth of July. Apocalypse Now sucks you in, and makes you feel like you, too, are on a boat, slowly making your way upstream, with nothing but the bizarre horrors of war for company.

Alright. We all knew it was coming eventually. No list of defining ’70s movies would be complete without the movie that completely defines the word epic, and is arguably the greatest movie ever made. I’m talking of course about Coppola’s The Godfather. Set in the heyday of organized crime in America, the film follows a decade in the life of the Corleone family, and its ups and downs in the criminal world. Boasting fantastic cinematography, a beautiful score, and what Stanley Kubrick declared to be the best cast of all time, the words sweeping, grand, and monumental don’t do the film justice. The Godfather is also one of the first gangster movies to show a crime family from the inside, rather than from the point of view of an outraged outsider. The film is just about as close to perfection as a movie can get, and if you disagree you might just wake up with a horse’s head in your bed.

From the opening, ethereal shots of The Exorcist, with its eerie score and haunting images, an unsettling feeling begins to grow deep inside you. Your heartbeat quickens, and the feeling quickly builds to blind terror as the horror and madness that is The Exorcist unfolds. When The Exorcist was released in 1972 it changed horror movies forever. Before this tale of the attempted exorcism of a young girl possessed by a demon, horror movies were mainly B-movie shlock – entertaining, sure, but nothing of artistic merit. The Exorcist changed all that, making horror mainstream and proving that you could make a genuinely terrific movie that scared the bejeezus out of you. Despite tales of people fainting and throwing up during screenings, people went back time and time again to see The Exorcist – in fact, the movie was the highest-grossing R-rated movie of all time until 1972! And it’s still scary – next time you’re home alone one night I dare you to get through the whole thing. No fainting this time.

The Vietnam War massively changed the US’s perception of itself. Gone were the rosy-hued glasses that had colored many American’s views of their country, and what was left behind was gritty, slightly dirty, and confusing. And nothing captures this post-war snapshot of American life better than Taxi Driver. Scorsese’s masterpiece about a Vietnam vet’s slow descent into psychosis on the grimy streets of New York City was an instant classic. The film starred Robert De Niro at the height of his powers as the eponymous Travis Bickle and introduced the world to a 12-year-old Jodie Foster as child prostitute Iris. The film was not without controversy, however, as its extreme violence and casting of a very young Foster as a sex worker drew backlash from multiple sources. America, and especially the New York City, of the late ‘70s wasn’t an Eden, however, and Taxi Driver captured the dark side of the country beautifully.

I know, I know. Where was The French Connection? Or One Flew Over the Cuckoo’s Nest? Surely Network or Annie Hall deserved to be on the list. Truth be told there are just too many movies that define the 1970s to include them on one list. But now you can add them! So get in the comments and tell us the best 1970s movies we left off. And if you have to chose just one? What movie defines the ‘70s? We can’t wait to read your comments, cause we here at DoYouRemember, respect the collective memory.