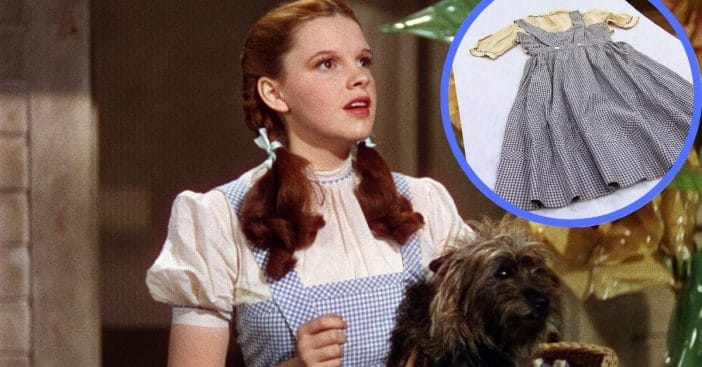 Somewhere over the rainbow there is a blue gingham dress worn by one wayfaring girl in red slippers. But for forty years, Judy Garland‘s dress in Wizard of Oz disappeared after being gifted to Catholic University. Now, it’s resurfaced once again for the first time in decades.

Joel Coen of the Coen director brothers once said “every movie ever made is an attempt to remake The Wizard of Oz.” Often, stories like Dorothy’s follow the Hero’s Journey, starting with a life of normalcy that’s changed by some big trigger that sends the hero off to parts unknown. But it’s a testament to The Wizard of Oz‘s enduring relevance that Dorothy’s in particular feels like the one cinema has tried to replicate, making props and outfits from the film like characters in their own right.

In total, People reports, there are at least five versions of Dorothy’s blue gingham dress; five have been verified as used props straight from The Wizard of Oz. Back in the 1970s, the dress was gifted to Catholic University, specifically Father Gilbert Hartke, former head of the drama department. However, a year into its new residency at the University’s D.C. campus, the dress is reported to have disappeared entirely.

RELATED: The Devastating Reason Why Dorothy Got Her Name In ‘The Wizard Of Oz’

However, Matt Ripa, lecturer and operations coordinator with the drama department, knew the trail went cold at the university and was determined to find it. Even he had his doubts, though, as the search went on. He wrote, “I had looked in our archives, storage closets, etc. to no avail. I assumed it was a tall tale (of which many exist for Father Hartke).” That’s when fate intervened.

“Our building is in the process of renovations and upgrades, so I was cleaning out my office to prepare,” Ripa recalled. “I noticed on top of the faculty mailboxes a trashbag and asked my co-worker to hand it to me. On the trashbag was a note for our former chair stating that he had found ‘this’ in his office and that he must have moved it when he moved out of the chair’s office… I was curious what was inside and opened the trashbag and inside was a shoebox and inside the shoe box was the dress!! I couldn’t believe it.”

After donning gloves to preserve any evidence of its nature, Ripa was quick to verify with the archival department that yes, this was indeed the very same blue gingham dress Judy Garland wore during her otherworldly trip to Oz. “Needless to say,” Ripa reflected, “I have found many interesting things in the Hartke during my time at CUA, but I think this one takes the cake.”