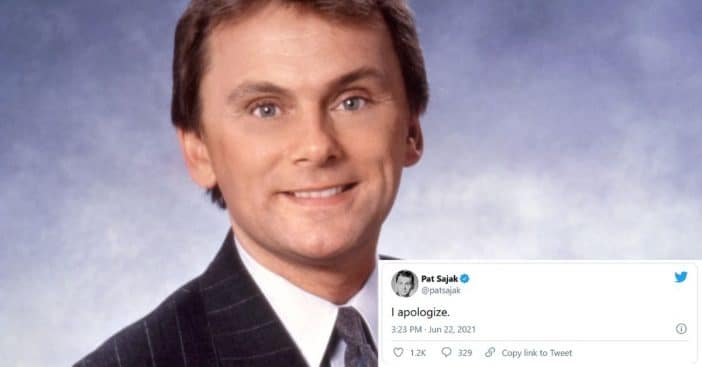 Pat Sajak has had a turbulent year filled with joys and sorrows and more than a few controversies. With more than a few incidents to point to, it left his vague public apology, posted on Twitter, with more questions than answers.

The Wheel of Fortune host posted “I apologize” on Twitter on the afternoon of June 22. No picture or elaborative replies accompanied the post. Followers filled in the gaps themselves, though, some referencing past hiccups from Sajak’s year.

By that point in June, Sajak had plenty to celebrate, mourn, and address as a public figure. iHeart recalls that his son graduated medical school and officially became a doctor. However, Sajak also shared the heartbreaking passing of his dog, Stella, who’d been in his life for 12 years.

Nice! Getting ahead of the game before the cancel culture gets to you. I respect that.

On Wheel of Fortune, he made headlines by getting into a passionate debate over puns, opening the prize envelope instead of giving the clue, making a suggestive comment at a contestant, and imitating another contestant’s lisp. So, what does his “I apologize” seek repentance for? Unclear, since no other information accompanies it. Indeed, one response reads, “Oh jeez. What did you do now?” Another, though, commends Sajak by saying, “Nice! Getting ahead of the game before the cancel culture gets to you. I respect that.”

Pat Sajak: I apologize.
The World: Could you be more specific?

Other followers found good humor in the situation, jokingly writing, “And don’t ever do it again!!!!! I have no clue what he’s apologizing for.” Another tweet echoed the sentiment, “Again? Or preemptively? Either way, accepted.”

I know it was an accident that you cut off the feed of President Nixon's Christmas address while in Vietnam, but we all make mistakes. I'm sure you've apologized plenty on that already. 😁

Perhaps referencing incidents from earlier in 2021, another user wrote, “Pat Sajak: I apologize. The World: Could you be more specific?” Yet another comment called forth a major blast from the past by writing, “I know it was an accident that you cut off the feed of President Nixon’s Christmas address while in Vietnam, but we all make mistakes. I’m sure you’ve apologized plenty on that already.” This is in reference to Sajak’s time as an army DJ who accidentally cut off Nixon just as he was about to “speak directly to the men and women serving our country in Vietnam.” So, what was the apology for?

Click for next Article
Previous article: Dolly Parton Celebrates Her Husband’s Birthday With A Recreation Of Her Playboy Cover At 75
Next Post: 91-Year-Old Clint Eastwood Thinks He Is Past The Point Of ‘Aging Gracefully’