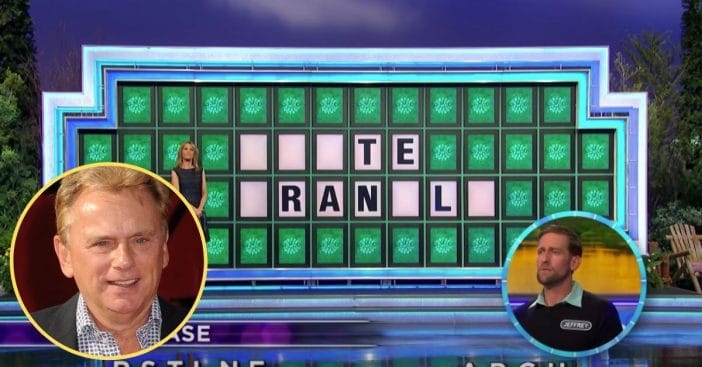 Wheel of Fortune host Pat Sajak accidentally slipped up and gave away an answer on the show, but no one noticed. During a bonus round, he accidentally gave away the answer when a contestant managed to scrape together some letters to leave the board reading:  “_ _ _ TE  _ RAN _ L _.”

“Yikes,” says Sajak, “Well, I’d rather be standing here than there, quite frankly.” And that was the answer: “Quite frankly.” Sajak seemed to catch himself slipping up as his voice tapped out when he realized what he said out loud. But even with the slip-up, the contestant did not answer correctly.

Pat Sajak gives away answer on accident – but thankfully, no one notices

“It goes to show you that people are concentrating and they’re not paying any attention to me,” Sajak says in a video after the show aired. “… It’s funny what your mouth will say that your brain says you shouldn’t do.” Then, poking fun at himself, he adds, “We’ll, quite frankly, see you next time.”

This silly mistake comes on the heels of Sajak catching some heat for apparently mocking a contestant with a speech impediment. As Sajak was introducing the contestants for a show back in February, he spoke with contestant Chris Brimble. After explaining to the game show host what he does for a living, it became clear to both viewers at home and Sajak that Chris had a slight lisp.

Sajak then concluded the brief conversation with “I thee” instead of “I see.” Chris laughed it off, but viewers at home were upset about Sajak mocking the contestant’s speech impediment that he could not control. Viewers took to social media to call the situation “appalling” and “offensive.”