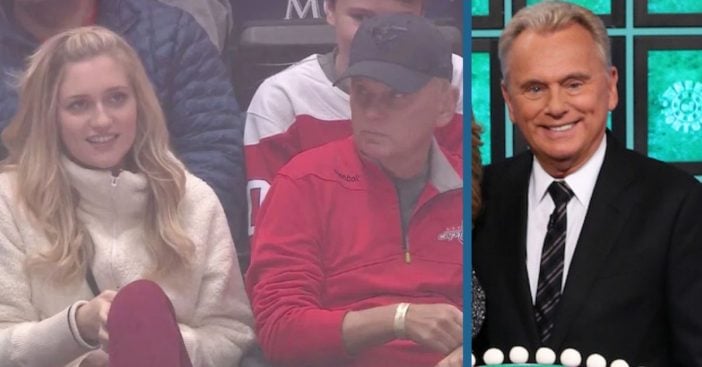 The 73-year-old Wheel of Fortune host, Pat Sajak, has made his first public appearance since undergoing emergency surgery in early November. He was seen at the Washington Capitals game this past Friday with his 24-year-old daughter, country singer Maggie Sajak. It was on November 8th that the taping for Wheel of Fortune from the previous day was canceled after Sajak would undergo successful emergency surgery to correct a blocked intestine.

“He is resting comfortably and looking forward to getting back to work,” an official Twitter post says. “Taping resumed today as scheduled, and Vanna White has stepped in as host.” The game show host was seen at the game donning red in support for his team.

Glad to see Caps superfan @patsajak out and about and rocking the red today! https://t.co/pRVNXj49gg

As the official Twitter post did mention, Vanna White stepped in to make sure the show goes on while Sajak was out. The pre-taped episodes starring White as the sole game show hosts begins airing on December 9th. These pre-taped episodes will also feature some recognizable guest stars including Mickey, Minnie, Pluto, Donald Duck, and Goofy!

Shortly after news broke that Sajak was undergoing surgery, he immediately takes to social media to let his fans know he’s doing OK. “I’m so grateful for all the good wishes during my recent illness,” he says a few days after his surgery. “Happy to say that the worst has passed, and I’ll be out of the hospital in a day of two, then back to work (unless @TheVannaWhite has completely taken over!)”

Sajak is currently one of the longest-running hosts in the United States. He has been hosting Wheel of Fortune alongside co-host Vanna White since the early 1980s.

This past week, Sajak actually took to social media in light of Thanksgiving with some good-hearted Sajak humor. “At our Thanksgiving meal today we discussed politics (“Who votes for more cranberries?”), gender issues (“Is that a boy bird or a girl bird?”) and climate change (“That oven is making it warm in here!”). Hope you’re having a good one, too!”

Leave it to Pat Sajak to give us some great Thanksgiving humor. We’re so glad to hear he’s doing better these days!