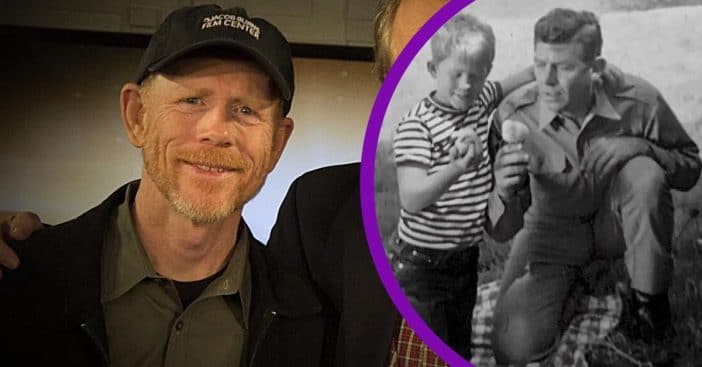 After crossing paths at such formative times in their respective careers, Andy Griffith came to have a very special place in Ron Howard’s heart. Indeed, on what would have been Griffith’s 95th birthday, Howard took to Twitter to share just how impactful he was and still is.

Much of the start of Howard’s acting career came about via The Andy Griffith Show as Opie Taylor, son of Griffith’s Sheriff Andy Taylor. Eventually, Howard would go on from being known as a child actor to a widely-regarded director and producer.

Andy would have turned 95 last Tuesday. As I say in THE BOYS, the memoir I wrote with my brother, Clint, Andy was 2nd only to Dad as the biggest male influence in my early life. (Dad took this photo.) Book comes out on October 12 & can be preordered here:https://t.co/EmxHFInnLV pic.twitter.com/CFncW6sjQx

Born on June 1, 1926, Andy Griffith, Ron Howard’s on-screen father, would have turned 95 this summer. Shortly after the occasion, Howard posted a picture on Twitter from their time on The Andy Griffith Show together as father and son.

RELATED: John Wayne Said He’d Have Been Proud To Have Ron Howard As His Son

“Andy would have turned 95 last Tuesday,” Howard’s post reads for Griffith’s birthday. “As I say in THE BOYS, the memoir I wrote with my brother, Clint, Andy was 2nd only to Dad as the biggest male influence in my early life.” He notes that his biological father took the photo in question, and that his book comes out in October, available for preorder now.

TV father and son formed a bond that lasted a lifetime

Together, brothers Clint and Ron Howard share their experiences growing up as child actors in the memoir The Boys: A Memoir of Hollywood and Family. Of course, for a thorough exploration, it discusses The Andy Griffith Show, which formed a friendship that lasted to the end of Andy Griffith’s life. Griffith remembered the Howards fondly with musings such as “Ronny has a wonderful mother and father. That is perhaps the principal reason he turned out the way he did. He was always a good kid. And he never considered me his father. He considered me not even a father figure. He considered me his friend. I was playing his father, he knew that.”

Likewise, Howard noted, “He treated me really well,” echoing the sentiments of friendship with an air of respected colleagues, adding, “but he made it a learning experience, not in a stern, taskmaster kind of a way, but I was really allowed a real insight into creativity and how things work and why some scenes were funny and others weren’t. That insight has served me really well over the years. Andy was really kind to me, always playful and fun, but, by the same token, he wanted to get the work done.”