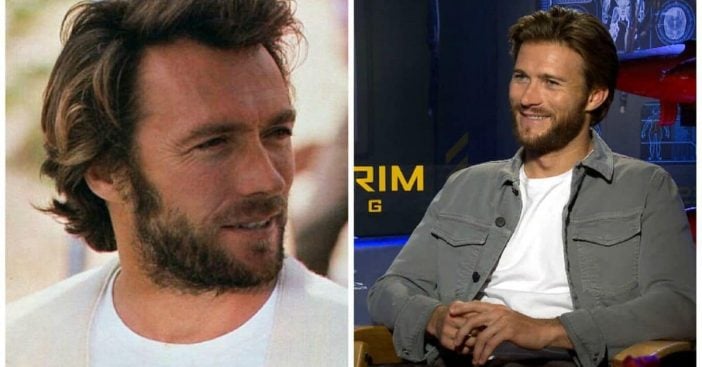 Clint Eastwood has eight children from various relationships! Of course, many of them have followed in his footsteps of acting and directing. One of the most famous children is his youngest son, Scott. Clint does have some daughters that are younger. Scott started his career using his mother’s last name, Reeves to try to make it on his own. He proved that he could! Now, he goes by Scott Eastwood.

One look at him and you can tell he is an Eastwood! He looks so similar to his father when he was younger. Over the years, Scott has taken some photos that mimic photos of his father in the past. They just prove how similar they truly look.

Clint made his son Scott Eastwood audition for his films

You might think that Scott automatically got the role in a movie that his father made or directed. Not the case! Scott has admitted that his father makes him audition for every single role. In fact, he has not gotten several parts including one in American Sniper.

To prove that they look alike even further, Scott dressed up as Clint’s character in The Good, the Bad, and the Ugly. Do you think he looks the same?

He has also recreated some of Clint’s famous photos

Scott took a look at some of his father’s famous photos and decided to re-create the photos. In some of these, they look like twins. There is no doubt that they are father and son.

They are both superstars

On the left is a photo of Clint Eastwood from a photo shoot in 1976. On the right is his son, Scott Eastwood, during our interview with him last week for @PacificRim.

Are there any other father/son photos that look this similar? pic.twitter.com/Sbz63acjLJ

In general, even when Scott isn’t trying to recreate his father’s look, they still look so much alike! Check out the comparison above of a younger Clint next to Scott.

What has he been up to?

In Scott Eastwood’s career of movies his father insists he audition for and ones without Clint Eastwood’s famous influence, Scott himself has some noteworthy entries in his filmography. On the one hand, he’s been in the gritty action-drama Gran Torino, but also films without Eastwood such as Snowden in 2016.

Comic book movie fans had another chance to see Scott that year through Suicide Squad as “GQ” Edwards. He was also in the sequel film to the 2013 film Pacific Rim; in the second entry, he played the pilot Nathan Lambert for Uprising.

Sadly, in 2014 his girlfriend, Jewel Brangman, passed away, a death Scott could only open up to the media about in 2016. Since then, there’s been no word on his dating life as of the summer of 2021, potentially to the uniquely devastating nature of the loss. Instead, he’s kept busy with work. This resulted in his new Colorado-based beer called Made Here, manufactured entirely in America meant to celebrate the country at its best. Back in the entertainment world, fans can see him in the 2021 film Wrath of Man alongside Jason Statham.