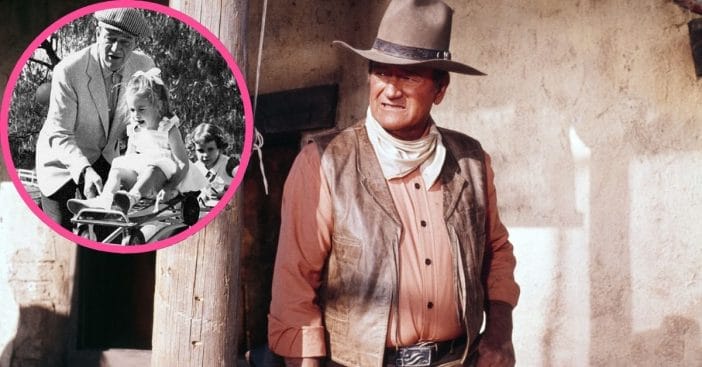 Duke John Wayne died of stomach cancer on June 11, 1979. But he left a strong impression and some important advice for how to live that resonates today for his granddaughter Anita La Cava Swift. Before he died, she got to spend a lot of time with the late star and learn a very important lesson about life.

It all stems from an actor keeping himself honest and remembering how he got where he ended up. All that fame only exists in part thanks to the fans. So, the relationship between talent and follower should be mutual and respectful. This he taught his granddaughter through example.

John Wayne's grand-daughter, Anita Swift, will be doing a live reading of our children's book America, Why I Love Her at 2:30pm on John Wayne Day (May 26th) 🌵 More info here: https://t.co/fGFiKfRwGI pic.twitter.com/dMNRW5dmBp

In an interview with American Cowboy, Anita La Cava Swift reflected on life as the granddaughter of John “Duke” Wayne himself. “I spent a lot of time with him,” she explained. “He loved being with his family. He loved to take us out on the boat or to the beach. We got to visit him on movie sets, and he often showed movies in his living room. I was 22 when he died, so I was fortunate to get to know him as a child, as well as an adult.”

In that time, Wayne impressed upon the importance of respecting the fans. To this day, she remembers him emphasizing what polite society knows as the Golden Rule. “Treat others as you would like to be treated,” she recited.“No matter how much you have or don’t have, you’d better be nice to everyone you meet because you’re no better than the guy sitting next to you.”

Putting it into practice

Around her, she sees that other celebrities either didn’t receive the same sage advice Anita La Cava Swift was privy to, or they don’t care to follow it. “One thing I never understood is why stars are horrible to their fans,” she recalled. “Why they don’t take time to give an autograph or say hello. My grandfather always knew that his fans were responsible for him being where he was, and he appreciated them tremendously. He was always polite — there’s no reason not to be.”

So, when fans approach her and exclaim with excitement, “My dad and I used to watch that movie together all the time” or “At the holidays, we all sit and watch John Wayne movies together,” she knows her grandfather would have been glad. As displayed by his habit of bonding with family, such relations were important, and he’d have been glad to hear firsthand how his films helped strengthen them for strangers. Indeed, she affirmed, “That’s exactly what he would want. And I must say, in every single movie, that’s him. That is John Wayne. That is Marion Morrison. That’s Duke. And there’s something about the guy that people identify with.”

Click for next Article
Previous article: Laura Ingalls Based Nellie Oleson Off A Real Person, Changed Her Name Out Of Fear
Next Post: Creator Of ‘The Addams Family’ Modeled Their House After His Own