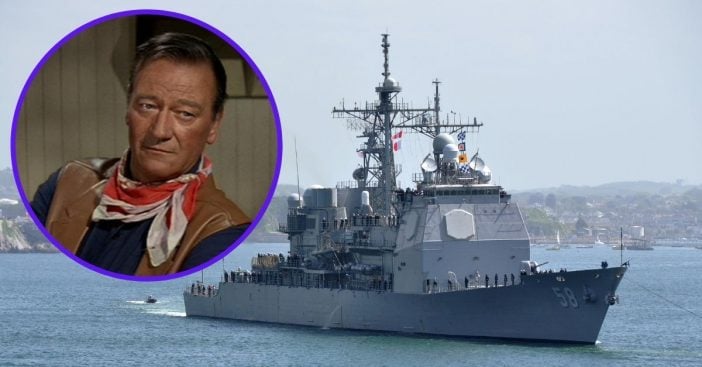 Richard Wilde, an 85-year-old Navy veteran, recalled an interesting event during his time serving aboard the aircraft carrier U.S.S. Philippine Sea. One foggy morning when he was 19 years old the pilots were conducting training – and the weather was rough. The aviators could only fly by instrument, and one nearly plowed right into Wilde.

“A man standing behind me said ‘wing ding dilly,’” Wilde said. “When I heard this, I turned my head, and the man looked down at me and said ‘that was pretty close, wasn’t it?’ I said ‘just about too close.’ He laughed at me and patted me on the head.” That man was John Wayne.

Yes, John Wayne, as well as an entire film crew were aboard Wilde’s ship. They were at sea working on the film The Wings of Eagles and Wayne was to play the lead role of Frank “Spig” Wead. Wayne was already a star, having acted in dozens of movies and gained fame for his part in films such as Stagecoach, Sands of Iwo Jima, and The High and Mighty. But from Wilde’s account of him, Wayne didn’t sound like some cocky big shot. “I’ve never met anybody more down to earth than John Wayne,” Wilde said.

One night, Wilde and three of his friends were playing cards in the coffee locker with the hatch open to catch a breeze. “That night, this big man looked through the hatch and said ‘Oh, I’m sorry, you boys are having a meeting,’” Wild recounted. “I said ‘No, no, come on in, and I hope you like coffee.’ He commented that he loved coffee and pulled up a chair and sat in it backward, resting his arms on the back of the chair.”

Wayne joined Wilde and his friends for coffee a few more times, even bringing along his costar Ken Curtis one night. It turned out Wayne had been having trouble sleeping while at sea. Wilde remembers that after chatting for a bit he had referred to him as “Mr. Wayne.” “He asked me to call him Duke,” Wilde said. That was Wayne’s famous nickname and he preferred it over “Mr. Wayne.”

Before the Duke and Wilde parted ways, Wayne left him with a signed one-dollar bill, a gift that he would cherish forever. About three weeks after the film crew left the ship, the sailors received a large coffee urn, bearing the engraving, “For the boys in V1 division, from the boys at MGM.”