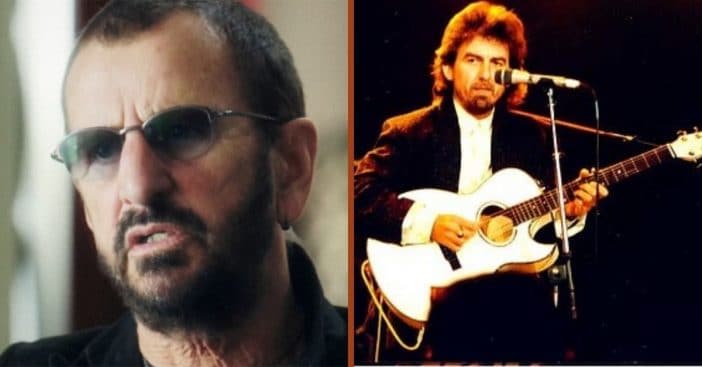 Of the original members of the Beatles, only Ringo Starr and Paul McCartney still live. John Lennon was killed in 1980 while George Harrison died in 2001. Starr actually visited Harrison weeks before the latter’s death, and so was privy to some of his last words on this earth.

Tension between bandmates is not uncommon, and even morbidly expected. One only needs to look back at the tense revolving door that was the Temptations. So, it makes it all the more meaningful that Starr can look back at Harrison’s final words to him and consider them “incredible.”

Ringo Starr and George Harrison were not without tension

It’s also all the more remarkable considering the affair that threatened to drive a wedge between the bandmates – that is, a literal affair. In 1971, Star and Harrison attended a dinner along with their respective wives, Maureen and Pattie Boyd. There, Harrison announced to the table at large that he was in love with Starr’s wife, revealing an affair neither went to great lengths to conceal.

Eventually, the fires of scandal fizzled and the bandmates “made amends after George’s dalliance with Maureen,” shares Showbiz CheatSheet. Things went back to business as usual until time began playing its cruel tricks on their lives.

“The last weeks of George’s life he was in Switzerland, and I went to see him,” Starr recalled. By that point, “He was very ill, and he could only lay down. I was going to Boston, ’cause my daughter had a brain tumor,” Starr continued. “And I said, ‘Well, I gotta go to Boston.’” That’s when Harrison interjected.

“[Harrison] goes — they’re the last words I heard him say, actually — and he said, ‘Do you want me to come with ya?’ So that’s the incredible side of George.” For context, the last two years had been tumultuous for the lead guitarist. Back in 1999, he survived a home invasion in which the intruder punctured his lung with a knife; the incident left him bleeding from the mouth and weakened to near death. Though his family downplayed his injuries, it’s believed that Harrison was forever changed by the trauma and that the stress helped his cancer return – cancer that ended up manifesting in the lungs. Even after all that, Harrison had asked Starr if he wanted company while seeing his daughter during Starr’s familial woes. That does indeed say a lot about his character.