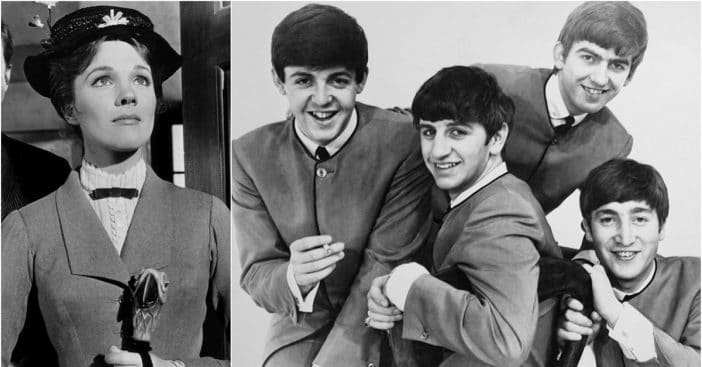 By October of 1964, the world had succumbed to a disease known as Beatlemania, elevating John Lennon, Paul McCartney, George Harrison, and Ringo Starr to the biggest sensations the globe had ever known. Among their legion was British actress Julie Andrews, who commented to The San Francisco Examiner at the time, “I love them!”

By that point, The Beatles had released half a dozen No. 1 singles, four No. 1 albums, had, in March of 1964, the top five songs on the charts at the same time (no one’s ever done that before or since) and their first hit feature film, A Hard Day’s Night.  Of course, Julie was no slouch in the pop sensation department herself.

RELATED: Whatever Happened to Julie Andrews, Maria Von Trapp from ‘The Sound of Music?’

She made her Broadway debut in 1956 in The Boy Friend, followed by her portrayal of Eliza Doolittle in My Fair Lady, playing the title character in a 1957 television production of Rodger & Hammerstein’s Cinderella, returning to the stage for Camelot and then making the leap to the big screen as, again, the title character in Walt Disney’s Mary Poppins. One would have to imagine that The Beatles kind of loved her, too.

Interestingly, the fact that Julie had expressed such enthusiasm for the moptop foursome was a little disconcerting to members of the Julie Andrews Admiration Society, described by the newspaper as “a group of non-shrieking teenagers from Oakland Technical High School,” then adding, “They turned out for Miss Andrews at San Francisco International Airport with signs that included, ‘Down with mopheads — we like Julie.”

For her part, Julie obviously didn’t seem fazed at all, despite the fact that (at least at that early stage) there were some who felt the Fab Four lacked “class,” which Julie seemed to embody. Her response, “If I combed my hair the right way, I could be a Beatle, too.”

Ms. Andrews — who was less than a year away from playing bringing Maria von Trapp to the movies — all we can say is, “Yeah, yeah, yeah!”