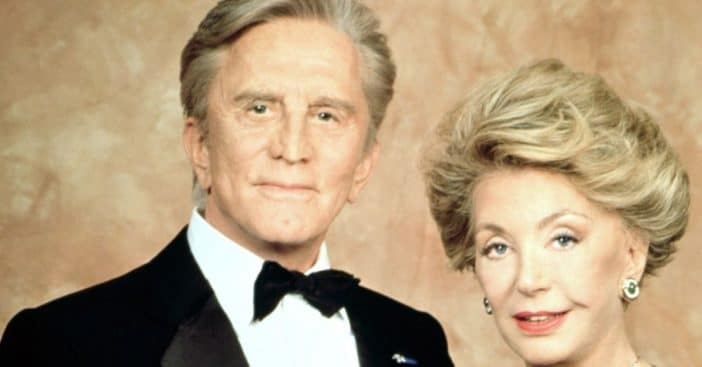 Kirk Douglas‘ widow, Anne Buydens Douglas has died. She was 102 years old and died at her home in Beverly Hills. Anne and Kirk had been married for 66 years. They met in Paris while Kirk was filming the movie Act of Love and they got married in 1954.

The couple had two children together, Peter and Eric. Kirk’s famous son Michael Douglas was born during his first marriage to Diana Dill. In 2017, before Kirk’s death in 2020, the couple published the book called Kirk and Anne: Letters of Love, Laughter, and a Lifetime in Hollywood.

Michael confirmed the sad news and wrote a tribute on Instagram to his stepmother. He included a lovely black and white photo of the couple when they were younger. He wrote, “Anne was more than a stepmother, and never “wicked”. She brought out the best in all of us, especially our father. Catherine and I and our children adored her; she will always be in our hearts. RIP Anne Douglas.”

Anne and Kirk also co-founded The Douglas Foundation which donated to many places including the Children’s Hospital Los Angeles and the Motion Picture & Television Fund. Anne was also very involved in raising money for cancer research since she recovered from breast cancer herself. She also helped homeless women and the Anne Douglas Center for Women was named after her.

She will be missed!