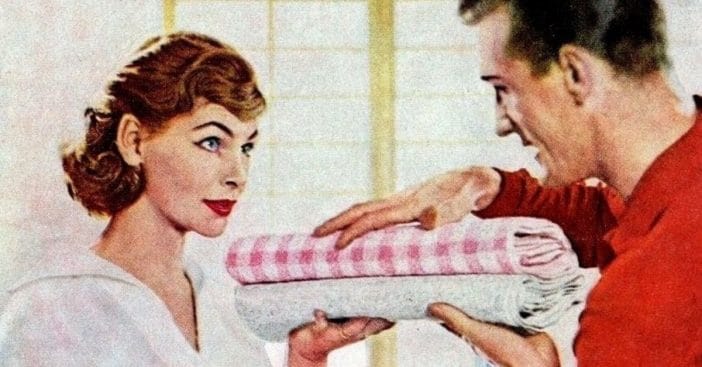 In the years following the end of major wars like the Great War and World War II, men returned both to the States and to jobs outside of the house. Upon their return, women often went to the roles western society expected of them: staying home, cleaning the house, fixing meals, and taking care of the kids. With such passionate feelings in favor of and against these norms, just what did people who lived through these decades think of men who did the housework?

Back in 1961, the Australian Broadcast Corporation featured what Dusty Old Thing calls a man-on-the-street segment. This program featured both men and women asked about the idea of men working around the house, and not just with heavy-lifting repairs or big power tools. Here’s what people at the time thought about such a notion.

Survey says men should help with the housework

Young women and elderly males agreed on one thing: the men of a house should be involved in the housework. Older men thought their counterparts should offer help in general, and young women especially wanted help when the woman had work outside of the home.

RELATED: Back In The Day, Women In The Army Had ‘Beauty Guidelines’

This would become a growing trend by the ‘60s. This decade falls right on the eve of feminism and women’s liberation reaching unprecedented momentum. This took many forms, from actresses attempting to bridge the pay gap to girls earning the chance to wear pants to school. Not everyone was in agreement, though.

Some habits are hard to break

The survey did find a passionate demographic that wanted to hold to its traditional division of labor. Young men generally favored women being solely in charge of household maintenance like cooking, cleaning, and child-rearing, while the man worked his job outside of the house and did the labor-intensive work.

Dusty Old Thing attributes this to different cultures and upbringings between the young and older men. It cites the cooperation military training and combat encouraged in the older generation; every soldier had to be ready to participate in some way and fill in the gaps wherever they existed. World War II especially demanded that everyone do their part in some way, and those some ways usually numbered in the high digits, from rations to manufacturing, and more. The next generation, however, had only the traditions of the past as their framework and so stuck to it like the law.

What do you think about a man’s involvement in the housework? Should certain people do certain tasks, or is overall cooperation better to maintain?