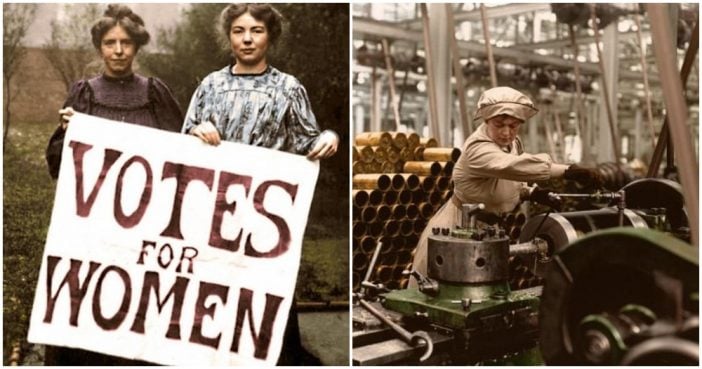 It’s been over 100 years since an act of Parliament granted women over the age of 30 in the United Kingdom the ability to vote. To herald this significant moment in women’s suffrage, photo colorizer and restorer Tom Marshall decided to bring eight black-and-white photos of women fighting for their rights to color.

“I’ve colorized these photos from the early 20th century to show how much of a struggle it was for the women than to get where they are today,” Marshall writes in his blog.

Marshall’s work offers a unique view into a time of change. In the photos, leaders of the suffrage movement pose for the camera. Suffragettes (who distinguished themselves from the broader label of suffragists by their willingness to take militant action) are arrested. A woman looks through a broken window at Holloway prison (where some 300 Suffragettes were jailed and force-fed) after an explosion of two bombs went off, an attempt by Suffragettes to blow up part of the jail’s southeast wall.

Marshall, like many modern colorizers, uses digital tools to achieve his results. He writes that for family photos he uses colors suggested by his client. For images where the colors aren’t known — or for historical photographs — he relies on research for accuracy and his best judgment. (The subjects he’s colorized in the past include sociologist and photographer Lewis Wickes Hine’s series documenting child labor during the early 20th century and images from American Prohibition.)

Since the invention of photography, people have added color to make their black and white images carry the hues and shades of real life. But it took decades of development before the commercially viable color film came to market. That leaves troves of old photographs in sepia and black and white, that feeling one step further removed from reality. With a skilled colorizer’s work, those photographs can pop into startlingly lifelike color. The effect can be as if someone reached back and pulled the photo’s subjects through the haze of time.

But colorizing remains a somewhat controversial topic. While critics feel that historical photos should be left alone, others see colorization as an art form of its own, explains Dunja Djudjic for DIY Photography.

The photos Marshall colorizes famously capture a moment on the cusp of the 1918 Representation of the People Act. The legislation was carefully crafted so that women did not suddenly become the majority of the electorate, as the U.K. Parliament’s own website candidly stated today.

The imperfect act gave women the right to vote, mollifying some activists, but the legislation continued to limit women. Many who worked in field and munition factories during the war were still younger than 30. They could not vote. Women who lived in rented rooms or homes and therefore didn’t own property also couldn’t vote.

Following these photographs, it would take another decade and change until the Representation of the People Act of 1928 was passed and women in the U.K. were finally granted suffrage equal to men.

Founders of the Women’s Social and Political Union (WSPU), Annie Kenney and Christabel Pankhurst. The group’s motto was “deeds, not words,” Marshall writes in his blog.

Emmeline Pankhurst, circa 1913. Prankhurst, a founded the Women’s Social and Political Union, a group of suffragettes who used militant tactics to fight for their right to vote.

Emmeline Pankhurst is arrested by Superintendent Rolfe outside Buckingham Palace, while trying to present a petition to HM King George V in May 1914. She was imprisoned many times.