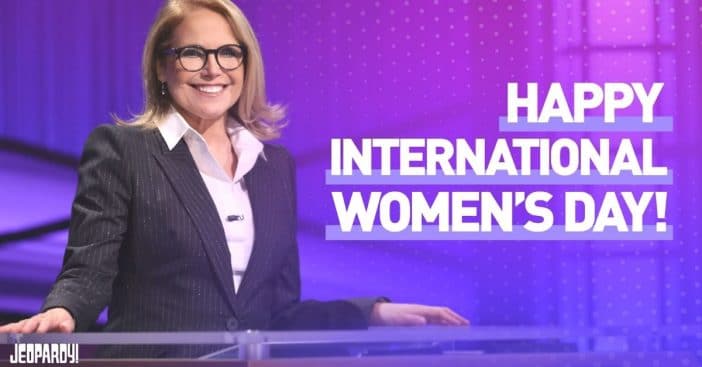 It was only fitting that Katie began her run as a guest host on International Women’s Day. Many fans were happy to see a woman at the podium, especially on a day honoring all women everywhere.

Katie is thrilled to be hosting the iconic game show. She said, “It is such a thrill to be here guest hosting a show I’ve watched and loved for years. And of course a real honor to help out as all of us recover from the loss of the truly irreplaceable Alex Trebek.”

RELATED: Katie Couric’s Temporary Hosting Gig On ‘Jeopardy!’ Could Be In Limbo After Her Comments

She continued, “’Jeopardy!’ will be matching the winnings from each show I guest host and donating that amount to the pancreatic cancer dream team from Stand Up To Cancer. So thank you, ‘Jeopardy!.’ Now let’s have some fun.”

The show is gearing up for even more guest hosts after Katie’s two-week run. Savannah Guthrie, Mayim Bialik, Aaron Rodgers, Bill Whitaker, Anderson Cooper, and others are slated to take over. Jeopardy! has not chosen a permanent guest host just yet. Watch Katie begin her hosting duties on International Women’s Day: