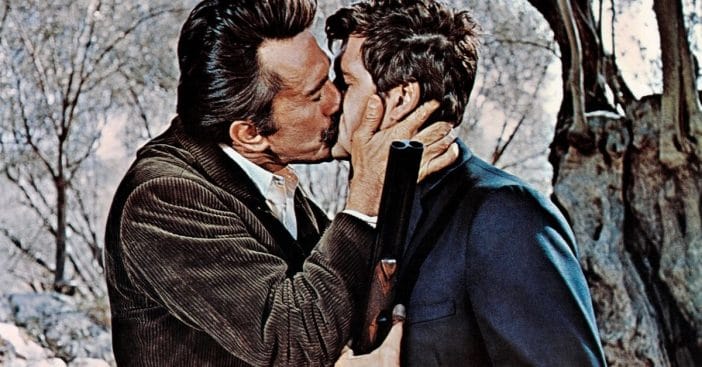 1968 saw the release of the crime drama film The Brotherhood. It starred Kirk Douglas, Irene Papas, Alex Cord, and Luther Adler. The film did not do well at the box office, but it did include some very famous beats and messages that resonated through the critiques. Most notably, the kiss shared between Cord and Douglas held interesting meanings that Cord has further discussed in subsequent interviews.

Douglas and Cord play brothers in the film, Frank Ginetta and Vince Ginetta respectively, each under the thumb of the Italian mafia, no matter how much they want to feel like powerful players in its games. Their kiss ends up a prelude to the impactful “kiss of death” Vito Corleone would display in The Godfather four years later.

The twisted, doomed lives of the Ginetta brothers

The IMDb synopsis for The Brotherhood reads “The son of a powerful mafia don comes home from his army service in Vietnam and wants to lead his own life, but family tradition, intrigues and powerplays involving his older brother dictate otherwise, and he finds himself being slowly drawn back into that world.”

Indeed, the film quickly follows Vince (Vinnie) and Frank’s entanglement in the mob, as Frank shows himself as something of a black sheep in this most powerful, murderous of families. After some fallout, Frank lays low in Sicily but knows he is a dead man walking. Frank then learns that higher-ups are forcing Vinnie to be the one to hunt Frank down, and to save his brother’s life, Frank chooses to make the job easy for him.

In an interview shared in 2013, Alex Cord shared insights into the power behind that kiss shared with Kirk Douglas. Interviewer with Michael from Retrotrash queried, “you’ve had some amazing opportunities in the past working in the past with such big names from the industry like Bing Crosby, Richard Attenborough, Kirk Douglas, so I was just wondering if you had any specific memories from those days and I do have to ask what was it like when you had to kiss Kirk Douglas in the movie The Brotherhood?”

To this, Cord explained, “Well kissing Kirk was… first of all he was one of the greatest people I’ve ever met in my life and I’m blessed to be able to say that I have met some really great people, a lot more than my share, and Kirk, we played brothers in that movie and at the end of the film he gave me a solid gold money clip and he inscribed it, because we were playing Italians, in Italian he said, ‘For My Brother, Vince. Love, Frank.’ And that was in Italian. So we had that kind of a relationship and we remained friends forever, to this day. So kissing him, to answer your question, was just another day’s work!”

As a part of the plot, however, the simple gesture weighed heavy on an ominous message the film wanted to articulate. Cord went on, “It was pretty antiseptic and of course it was an extremely emotional scene because it was the kiss of death and I was going to have to kill him, which really points to the power of the mafia that they could get one brother to kill another, to exert that kind of pressure where I simply did not have a choice. I had to kill him or they were going to kill his wife and my wife and child. So that’s how it came about and that’s what the kiss was. And he initiated the kiss because he knew I was there to kill him.”

Click for next Article
Previous article: Adriana Caselotti, The Original Voice Of Snow White, Sued Disney For $200,000
Next Post: Woman Charged With Felony For Not Returning VHS Tape — She Only Just Found Out