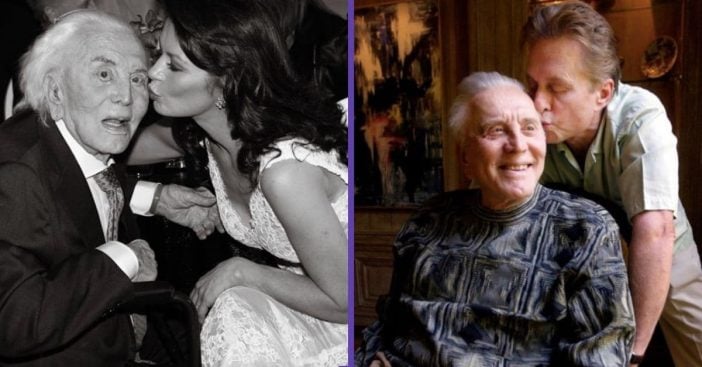 It’s hard to believe that it’s only been three months since the late and great Kirk Douglas died at the age of 103. Michael Douglas and his wife, Catherine Zeta-Jones, still look back on their time with him. “There wasn’t anyone like him,” Michael tells Entertainment Tonight about his late father. “There’s another generation, that was the great generation, post-World War II … and Dad was one of kind.”

Michael and Catherine have actually teamed up recently to help raise funds for “We All Play Our Part: A Benefit for MPTF.” A benefit through the Motion Picture & Television Fund, the funds raised will go toward COVID-19 Emergency Relief. Michael believes that if his father were still alive, he would be “very happy” with their efforts.

“I know he takes particular pride — not so much in whatever I worked with and I’m doing with the Motion Picture Television Fund — but I know he loves Catherine [and] the work that she’s doing,” Michael says about what Kirk would think about their efforts.

He continues, “He always used to tease me. We would call him up and he would be like, ‘Enough with you, let me talk to your wife.’ He was a flirt until the very end.” Catherine chimes in with agreement, “Oh yes, he’s a great flirt.”

Admiring everything he did in his lifetime

“He crosses our minds every day. But for me, during this time of, ‘OK, we are all locked down, what do you do?’ It’s so easy to go into a procrastination vibe,” Catherine notes. “And Kirk, he went through so much from a helicopter crash to a stroke and then just age, being alone and what does he do with this time.”

“And what was so admirable about him was he was always involved with courage events, he wrote 11 books, he worked with his rabbi, he worked with his philanthropic endeavors and he always created something to do and he taught me that lesson. He always said to us, ‘Write a book, do something else. What are you doing?’ And he’d be working on something right now, I’m sure.”

Kirk passed away back in February of this year. He will be forever missed and loved by so many.