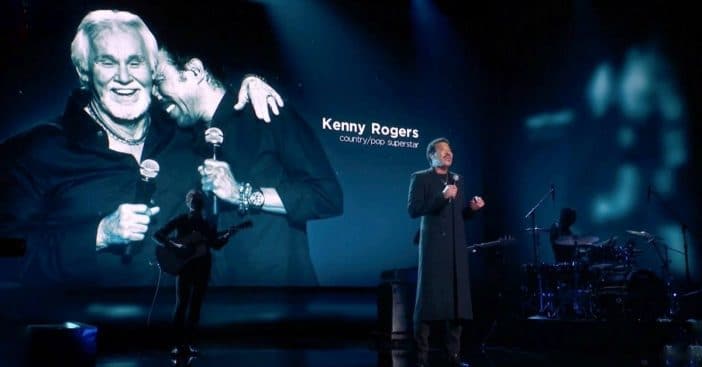 After a year of great loss, the Grammys often have an in memoriam segment honoring the artists who passed away. This, in turn, offers those who live a chance to pay tribute to those they respect. During the 2021 ceremony, which occurred on Sunday, March 14, Lionel Richie paid tribute to the late Kenny Rogers.

Country Music Hall of Famer Kenny Rogers died almost a year ago on March 20, 2020. He was 81 years old and under hospice care. Lionel Richie is 71 and honored not just a music legend but one of his friends by singing “Lady.”

When I wrote “Lady“ for @_KennyRogers, little did I know it would be the start of a friendship that would last a lifetime. Singing this song at the #Grammys tonight, without Kenny there, was incredibly hard.

I miss you man. pic.twitter.com/uohwLZbQwZ

Names and faces slowly came and went on a giant screen during the 2021 Grammy Awards this March. Various songs played, sometimes with original recordings, but often with contemporary artists honoring the departed. To celebrate the life and mourn the death of Kenny Rogers, Lionel Richie sang “Lady,” which Richie himself had actually written and produced.

A hit of the ’80s, “Lady” actually helped Rogers break new ground – and earned him a number one hit at last. Across his career, Rogers would become a star not just in the country music genre, but in multiple genres. “Lady” represents the meeting of two minds as talented artists and close friends. While the performance and meaning behind it was enough to move audiences around the country, Richie himself was immediately deeply impacted. He ended his song with, “I miss you, Kenny. I miss you, man.”

“When I wrote “Lady“ for @_KennyRogers, little did I know it would be the start of a friendship that would last a lifetime,” Lionel Richie tweeted the night of the Grammys. The post went on, “Singing this song at the #Grammys tonight, without Kenny there, was incredibly hard. I miss you man.”

Other stars honored artists who had passed away from various causes over the year. In April of 2020, country folk singer-songwriter John Prine died from COVID-19. Brandi Carlile honored him with a cover of “I Remember Everything.” Additionally, pop music icon Little Richard died in May at the age of 87; his death was related to bone cancer. Bruno Mars and Anderson Paak worked together for a tribute to the cultural figure.

Click for next Article
Previous article: ‘The Talk’ Is Taking A Break Amid Sharon Osbourne Controversy
Next Post: Duane ‘Dog’ Chapman Poses With His Granddaughter In New, Loving Photo